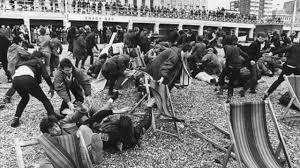 We often look at today’s teenagers and young adults and despair at the type of music they listen to or the fashions they wear. It’s good to remember that our forebears were quite happy to do the same thing. The style may change but the general idea is the same, annoy the older generation. Before Grunge, before Metal and before Punk and Glam there were Mods and Rockers. The Mods were smartly dressed young men and women who would favour a multi-pocketed suit or a coloured Farah Shirts like the ones at https://www.ejmenswear.com/men/farah with a big Green Parka. They listened to the Who and to the more soulful tunes of the North and Motown. They rode on Scooters like Vespa’s featuring the most amount of mirrors the better. On the opposite side were the Rockers. They were into Led Zeppelin and Sabbath. They wore leather jackets and jeans black or blue. They despised the Mods who they thought of as effeminate and weak. They rode on motorbikes and saw themselves as manly. They represented a polarisation of youth culture like never before. They were the sons and daughters of the Teddy Boys the first real teenager youth movement and they had time and leisure. They both decided to leave the urban London sprawl and go to the South Coast. What happened next is history.

The first skirmishes of the groups began, ironically, in Hastings and in Margate. Whilst there were isolated pockets of trouble the sudden realisation of a city escape and the fact that this was the first time they were away from their parents influence meant that the two sides were free to engage in violent discourse. In other words, they were on the merry side, or worse, and at the seaside. An act that was to be repeated in Ibiza and Marbella by the subsequent generations after. The first fights in Margate and Hastings happened on 1964 and both sides agreed that they enjoyed it so much they’d meet up again next year at Brighton. The Whitsun weekend was where the two sides met battle lines were drawn and the conflict began. 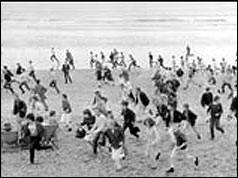 Except it didn’t. Further study shows that apart from an incident where a small group of Rockers suddenly found themselves set upon by a larger group of Mods. The Rockers even had police protection. The fighting was fleeting, and the police said later that it was no different to the general mayhem that occurred most weekends in the town anyway. What is clear is that the media were looking for a new moral panic. Whether it was the Ted’s slashing cinema seats in the fifties or the Punks generally existing in the seventies the media needed a focus and the youth always make a good target to blame.