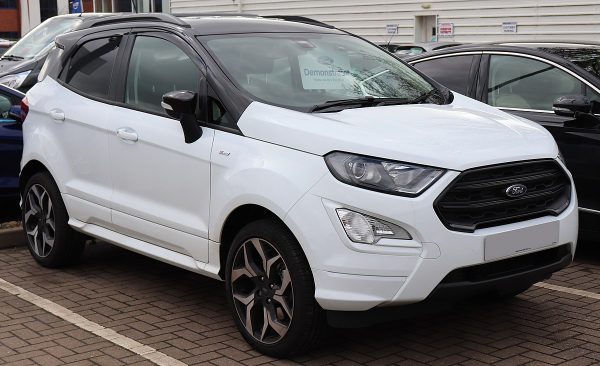 The 2018 Ecosport is Ford’s first attempt at a subcompact crossover for U.S. markets. They wanted to jump onto the bandwagon, as this segment is exploding in the United States. The Ecosport has already been circulating in some foreign locations, so Ford only had to make a few changes to make it competitive in the U.S. Consider the pros and cons of the 2018 Ecosport before you make a purchasing decision.

The Ford Ecosport gets surprisingly poor gas mileage for a small SUV at 29 miles per gallon highway. This would be strong for a huge SUV, but it’s disappointing in this segment. For example, the Chevy Equinox beats the Ecosport by 10 full miles per gallon. That’s over 100 more miles per tank!

The most frustrating part about this for buyers is that Ford’s gas guzzling tendencies don’t even produce good power. Lack of acceleration is one of the biggest downsides to this vehicle, and 0 to 60 times are anemic.

This car also falls short in another crucial performance category: safety. Despite the Ecosport’s experience in foreign markets, Ford hasn’t seen fit to load it up with safety features. The car hasn’t been reviewed by any substantiated safety tests, and is currently completely unrated. Only time will tell if Ford took appropriate measures before bringing this vehicle to the United States.

The highlight of the Ford Ecosport is that it does look nice. It offers a varied color palette that includes both conservative and trendy color choices. It has a sleek exterior design that fits in with the rest of the subcompact crossover segment. The only baffling design decision is Ford’s inclusion of a side-opening rear hatch. This isn’t a huge deal, but it can make it awkward to access the trunk in some tight spaces.

The biggest concern for the Ecosport’s introduction in the United States will be the current lack of safety information. There’s not necessarily any reason to believe it will perform terribly on the safety tests. That said, it’s hard to have blind faith that the Ecosport will be as dependable as some of the other contenders in this market segment.

Chevrolet Trax – The Trax gets an estimated 33 MPG highway. Pair that with its quick acceleration and great cornering for the complete driving experience.

Chevrolet Equinox – The Equinox comes standard with all the safety features you’d expect from a modern American vehicle. Consider upgrades like a 1.6L turbo-diesel engine for fuel economy that blows the Ecosport away.

Honda HR-V – This crossover combines a flexible rear seating with great gas mileage. The only main setback of this option is how slow it is. When you want to move, you simply can’t.

Jeep Renegade – While not a huge improvement on the Ecosport, it is a slight improvement. Buyers get a fun to drive crossover, but the fuel economy doesn’t compare to the other options in this vehicle style.

This article is provided by Valley Chevy. Visit us online today to find the Phoenix Chevrolet dealership closest to you to schedule a test drive in a brand new Chevy vehicle!