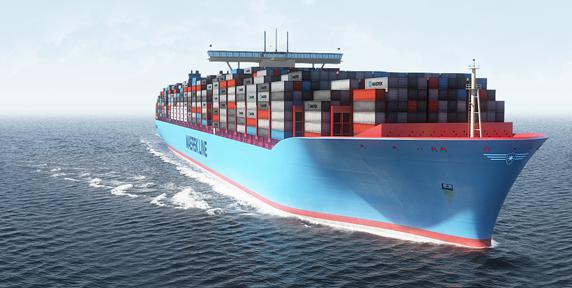 The construction of twentyTriple-E container ships, each one capable of carrying 18,000 twenty foot containers, put Maersk Line at the helm of change. Maersk built these vessels because their size and capacity offered reduced energy consumption and lower CO2 emissions, each vessel is 400 metres long and 59 metres wide.

Amazing Facts About The Triple-E

Weighing in at 60,000 tons, Triple-E is constructed from the same amount of steel as 8.4 Eiffel Towers would be. The vessel is fabricated with enough steel to make 185,489 Harley Davidson motorcycles. This vessel can carry up to 18,000 container units. If all these containers were to be transported by train – the train would need to be 110 km in length, if 18,000 containers were stacked on top of one another they would be able to reach beyond the stratosphere, that’s 47 km high.

Triple-E class vessels are equipped with a waste heat recovery system, this system will save up to 10% of main engine power, it may not sound much but this system will save the average annual electrical consumption of 5,000 European households. The Triple-E class uses 1 kWh of energy to move ton of cargo 184km, a jumbo jet can travel just half a kilometer for the same amount of energy per ton of cargo.

A obvious trend in cargo patterns show the rapid growth of markets in Eastern and Northern China, this trend will lead to a change in the requirements of vessels and their shipping patterns. This shift in trends creates an opportunity for Maersk, Maersk is planning to grasp this opportunity by building more energy efficient vessels like the Triple-E to lead the shipping industry in a new, more environmentally friendly direction.

Triple-E stands for Economy of scale, Energy efficiency and Environmentally improved. The vessels are built by the Daewoo Shipbuilding and Marine Engineering Co. Ltd. Maersk Line has the option to order an additional twenty vessels. Daewoo also built the CSCL Globe.

The Tripple-E has the benchmark for size in the container shipping industry. Through innovative feats of engineering the Triple-E has a vastly expanded inside cavity which gives greater capacity than Maersk’s over ships, the additional capacity means that the Triple-E’s can carry 2,500 more containers with quite a small change in the vessels length and width.

Due to port restrictions it has become difficult to build ships bigger than Oscar or the Triple-E class. Before the Tripple-E and Oscar, Emma Mærsk was the world’s largest shipping vessel in operation. The Tripple-E is only four meters longer and three meters wider than Emma Maersk.

This post was written and supplied on behalf of Go Supply Chain, www.gosupplychain.com. Supply chain and warehouse consultants.