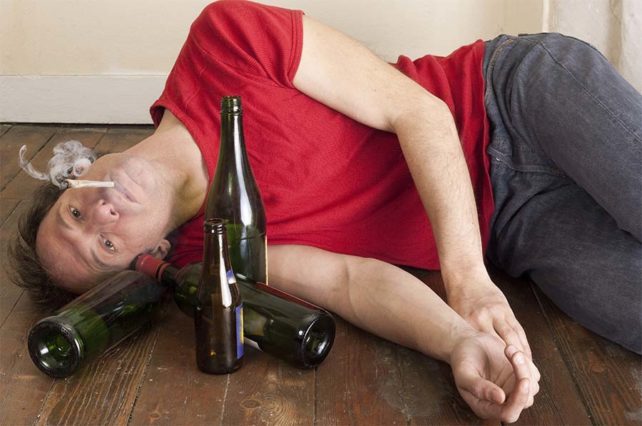 Alcohol has many effects on the human body. Effects may vary depending on the amount of alcohol consumed. The idea that alcohol escapes the body through urine is false. Majority of the alcohol is absorbed in the bloodstream and then distributed in the whole body. Only a tiny amount of alcohol escapes the body through the urinary tract and through our breath.

The effects of alcohol don’t stop here. They also effect the ability to think clearly, reduce the effectiveness of senses, cause thiamine deficiency, a.k.a., vitamin B, and even paralysis of certain muscle groups in the body.

It is also observed that regular users of alcohol are mentally as well as physically more dependent on alcohol than their non drinking counterparts.

Although, both women and men metabolize alcohol differently, women need much lesser alcohol to make them feel drunk.

Alcohol is a disaster for the digestive system in the sense that every time you consume alcohol, you damage your digestive tract. It irritates the salivary glands, causes ulcers in the esophagus, and leads to acid refluxes and heart burn. Inflamed pancreas is also a common side effect of binge drinking.

It is also difficult for the digestive tract to absorb nutrients in the presence of alcohol. Micronutrients like Vitamin B and C are not absorbed properly if alcohol is consumed. To top it off, heavy drinker are also more prone to mouth, esophagus and throat cancers.

The most dreaded side effect in men is erectile dysfunction along with improper testicular function and infertility. In case of women, it can cause menstruations to stop and eventually lead to infertility. It also causes disruptions during pregnancy. Alcohol abuse can substantially increase the chances of miscarriages and premature births.

You immunity is highly weakened as a result of alcohol consumption. Heavy consumers of alcohol are more prone to diseases like tuberculosis, hepatitis and pneumonia. Long term usage of alcohol is also linked to increased chances of cancer.

The heart is a complicated organ. There are cases when effects are seen after long term abuse of alcohol and there are also cases when only a few drinks have caused serious heart ailments like strokes, heart attack or even failure. Alcohol abuse is related to cardiomyopathy, which is the poisoning of the cells in the heart, irregularities in heart beat, hypertension and even heart failures.

The skeletal muscles of the body also suffer from abuse of alcohol. It is difficult for the body to make new bones. Heavy drinking also puts you at a risk of osteoporosis, a disease that causes thinning of bones and loss of muscle. Muscular atrophy is a common result of binge and indiscriminate drinking. Muscles of the body start to shrink and lose size which causes frequent cramps, weakness and pain.

Wan to know about effects of alcohol and fitness? Check it out