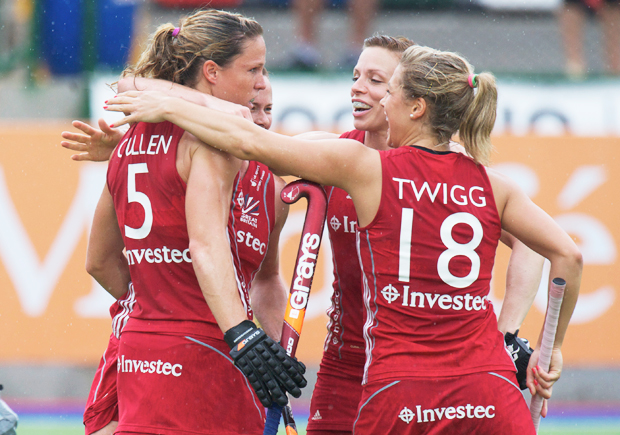 Head coach Danny Kerry has named the 18 players who will represent Great Britain at the Women’s Hockey Championships trophy, which takes place in London later this month.

The squad contains a vast amount of tournament experience, with the majority of the players having played in many of the previous tournaments. Leading the line is Kate Richardson-Walsh as captain. This will be her 7th Hockey Champions Trophy.

Alongside Richardson-Walsh are Laura Unsworth and Alex Danson, who have both made five previous appearances, and Helen Richardson-Walsh, Georgie Twigg and Crista Cullen, who have competed in the tournament four times. Cullen finished as joint top scorer in the 2012 tournament, with five goals, helping Great Britain secure a silver medal, their best ever finish.

After the tournament in 2012, Cullen hung up her hockey shoes and moved back to Kenya, where she had spent most of her childhood.

When quizzed on her time away from hockey, Cullen said that she had always worked outside of hockey. Having returned to Kenya she set up a cross-fit business, obtained her pilot’s licence and worked for a security business.

She also volunteered in a wildlife conservancy managed by her father at the Tsavo East National Park. Poaching for rhino horns and elephant ivory both continue to be major issues and Cullen was keen to help as best she could.

Susannah Townsend, who plays for Canterbury, is set to reach 100 international caps during the contest, amassing 95 appearances to date. Both Hannah Macleod and Samantha Quek recently passed milestones themselves, with Macleod receiving her 50th cap, and Quek reaching the 100 mark.

Ready for the challenge

Asked about his team’s chances ahead of the competition, GB coach Danny Kerry said that be believes he has chosen a “complimentary blend” that should be capable of adapting to the various challenges inherent in the Champions Trophy.

Kerry believes that the team has the pace, creativity and “assuredness across the lines”, with all team members relishing the opportunity to play once again at the Olympic legacy venue in Lee Valley.

He adds that he believes all of the competing teams to be capable of winning the trophy which should make for fierce competition and is likely to see game outcomes determined by really fine margins.

The tournament runs from the 18th of June to the 26th of June, and Argentina, who are currently ranked number two in the world, are Great Britain’s first opponents. The teams play each other on the opening day.

Great Britain then go on to play the Netherlands, ranked as the world’s number one team, on the 19th of June. Followed by New Zealand on the 21st of June, the United States on the 23rd of June, and Australia on the 25th. The classification and medal matches are scheduled to take place on 26 June.

The women’s tournament follows directly on from the men’s event which is also held in London.