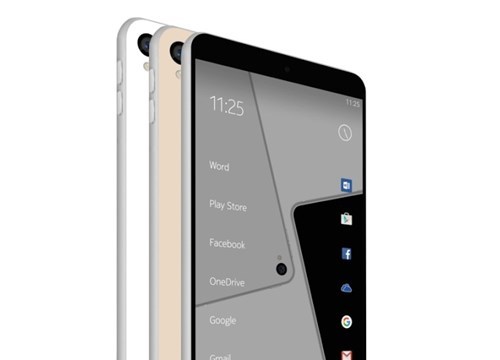 Nokia C1 smartphone image has popped up on the Internet , According to the site, Nokia poweruser  Nokia C1 will be available in four colors, gray, gold, pink and white, Looks very similar to the iPhone Apple 6s. Another unconfirmed leaked source for now reports that the C1 will run on the Android operating system for one variant and Windows 10 for another model. It is quite possible. According to the latest leaked source regarding the Nokia C1. It will be available in two versions.

Two different configurations depending on the version. The 5-inch model model is expected to arrive on a rear 8-megapixel sensor autofocus, LED flash and a 5-megapixel front sensor. Nokia is looking to get back into the smartphone market.

On the other side, For the 5.5-inch model will feature a 13-megapixel rear camera autofocus, LED flash and 5-megapixel front camera. Finally,  The backside of the smartphone comes with of glass or polycarbonate panel, LED flash is present. Nokia C1, Nokia’s first real Android smartphone is expected, Nokia is a brand that everyone seems to like, capable of innovation and experimentation.

According to the Nokia CEO Rajeev Suri, Nokia will wait another year to unveil C1, So Nokia C1 for 2016, is it possible? Probably. For now, these are only potentials that are rendered on surface information. However, remember that Nokia holds a patent that allows the user to choose between Android and windows OS on the same model. Compatible with 2G,3G with A-GPS, GLONASS, Wi-Fi 802.11 a/b/g/n.