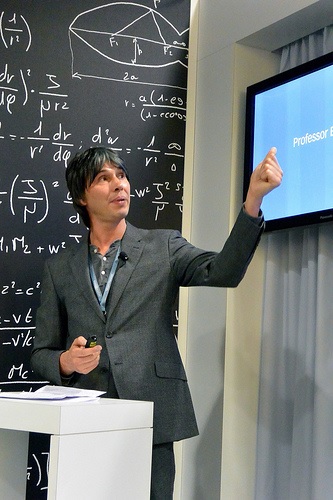 As charming and hilarious as cartoons may be for children, the little tykes are also becoming increasingly infatuated with science-related TV shows, to the relief of their parents and society at large.

So, teachers, I put it to you that you should utilize these shows to truly engage your pupils.

Here are the Top 10 science-related TV shows to be used in your wonder emporiums:

Above all, Professor Brian Cox’s “Wonders of…” series is by far his best. From exploring the solar system, to the possibility of life throughout the universe, this series is an absolute must for the classroom when discussing the vastness and infinity of space.

National Geographic’s In the Womb is as enlightening as it is distressing, detailing the journeys of both humans and animals as they progress from a foetus to a fully-formed baby. Using highly detailed computer imagery, your classroom is sure to be filled with OOH’s and AHH’s, and not always in a good way.

3) Wallace and Gromit’s World of Invention

This show allows both Aardman favourites, Wallace and Gromit, to analyse an array of different inventions, and observe where certain projects are heading in the future. This would be brilliant for your tinkering pupils to gain ideas and learn from the great inventors of the past.

Although this is one for the boys, James May’s Man Lab is arguably for everyone, as it explores the traditional skills of craftsmanship and using your noggin’ to solve problems and benefit your life overall. This show will provide lots of laughs and the odd explosion, which will make this a classroom favourite.

We need more educational TV shows that make kids realise the world doesn’t revolve around One Direction or football. Well, I have a TV show that does just that. Bang Goes the Theory’s hands-on approach to understanding scientific theory really emphasises just how much science has and is moulding our world. Check it out.

Taking on historical myths and principles enacted in television/movies to see if there is any truth behind them, MythBusters uses the best and most exciting experiments, securing it as one of the longest running and popular shows on the Discovery Channel. This is not a show you want to miss out on.

Gentle giant, Dara Ó Briain, takes on one specific subject, exploring it from different and conflicting perspectives to determine what it all means. With the help of scientific professionals and the studio audience, this show is very fun and doesn’t get overly technical, a combination that your pupils will most enjoy.

Horizon is known for always trying to ‘broaden our horizons’ with unknown or obscure facts and insight into our complex world. The show can get technical, but in recent years critics have condemned the show for ‘dumbing down,’ so it may work very well in the classroom… Not that children are just dumb adults.

Loveable adventurer and pensioner king, David Attenborough, presents our wonderful and awe-inspiring underwater world, investigating its natural history and a selection of its most special inhabitants. The Blue Planet also emphasises that humanity does not force the extinction of certain underwater species, which is absolutely important for children to understand at an early age.

This is perhaps my favourite scientific TV series of all time, all because of one man; Dr George McGavin. This eccentric and potty entomologist, along with his team of zoologists and wildlife cinematographers, set up camp in some of the most remote areas of the planet in order to study rare animal species, as well as capture it on film. The team really go for it, especially McGavin who literally gets inside the smallest of holes just to present his most favourite insects.

The importance of nature and untouched habitats are the messages behind this show, making the “Lost Land of…” series not only a joy to watch, but especially educational.

Television has such a monumental impact on children, so it really is a good idea to encourage children to watch the RIGHT programs by promoting them in your classroom. Who knows, you may pick up some teaching tips or a great idea for an experiment during the process, meaning both you and your pupils will benefit. I implore you to give it a try… Do it for Science!

Hey, do you know any other really good science TV shows? Then please share them down below!

Ben Kettlety is a writer and TV addict, who would love to see lots of little scientists running around and engaging with this extraordinary world.