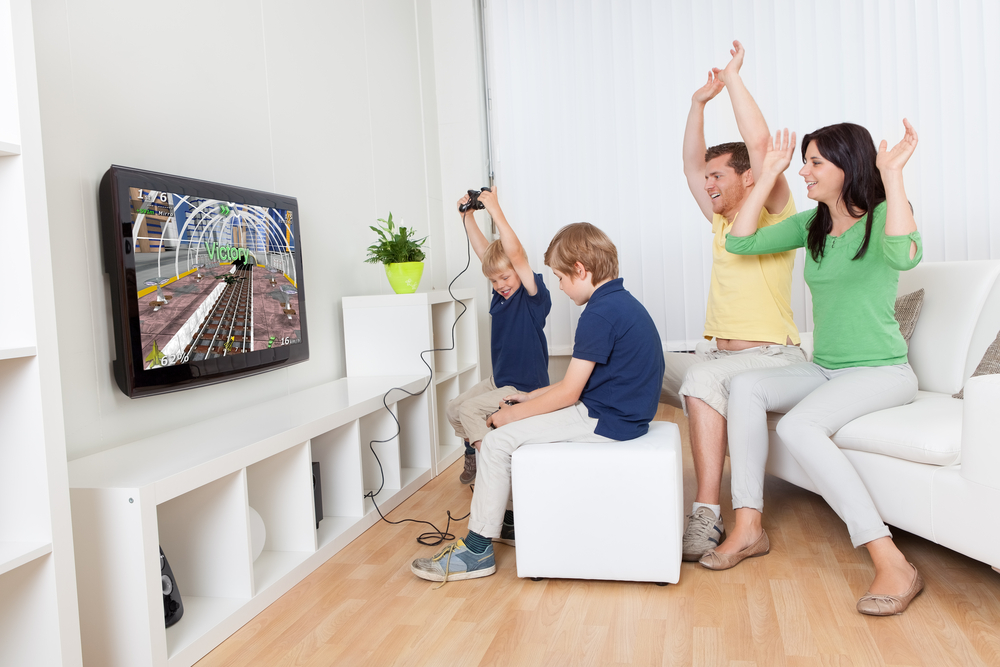 America has had a love affair with TV since the 1920s, when the first sets started showing up in homes.

With every advancement in television technology has come a corresponding increase in TV size. Why not? Bigger TVs mean a more immersive experience and, as Baby Boomers age, large TVs can also help older citizens enjoy the same programming they always have. Curious about how we got to the age of the mega TV? Here’s a brief history for your reading enjoyment.

The first TVs produced in the 1920s to the 1940s could hardly be called “big screen.” Though consumers were fascinated by the idea of “watching the radio,” the screen on which they did so rarely exceeded 10 inches. To put that in perspective, that’s the size of the screen on today’s “mini” laptops and tablet computers. Whole families would gather around these tiny screens to view blurry, black and white pictures.

The 1950s and 1960s saw the advent of the first large screen TVs. According to The Daily Bark, black and white TVs generally came in larger sizes than the newer color televisions. Black and white screens could be up to 24 inches, while color models rarely got larger than 21 inches.

This era saw the advent of the major TV networks such NBC and CBS, and the most commonly viewed program on such televisions was broadcast news. Other popular programs included “quiz shows,” the forerunners of the modern game show.

The middle decades of the big screen TV were the 1970s and 1980s. In those times, the most common television was the curved cathode ray tube television. These televisions came in a wide variety of sizes, with the largest topping out around 30 inches in size. Another option was the rear projection TV, which offered larger TVs (but at a cost of lowered picture quality). If you owned a TV in this era, you had a wider variety of programming available than in earlier decades. This era saw the birth of cable TV, which, according to the NCTA, offered 28 networks as 1980. Consumers could also record programs using video cassette recorders in order to watch programs at their convenience.

The First LCD and Plasma TVs

In the late 1980s and early 1990s, manufacturers responding to consumer demand for larger televisions faced a problem: CRT television technology made units larger than 40 inches impractical. In 1988, Sharp introduced the first liquid crystal display (LCD) television. Though CRT TVs continuted to dominate the market for the first half of the 1990s, by the year 2000, the market had been cornered by thinner, lighter, and sharper LCDs and the newer plasma screen (introduced in 1998).

The early 2000s were all about the big screen. As LCD and plasma technology developed, screens grew in size while units dropped in price. Though plasma technology initially led the pack in picture quality, the lower price of LCD, plus how easy it was to adapt to the emerging High Definition market, meant that LCDs eventually took the lead. Widescreen LCD TVs up to 52 inches are now available in the three figure price range, putting them well within the reach of most middle-class families.

Though nobody can say for certain what developments in entertainment technology the future will bring, there is potential in film-based displays. Many companies are experimenting with using light emitting diodes in conjunction with organic films to produce ultra-thin display screens.

While these “OLED” technology televisions are still under development, they cost less to manufacture than LCD or plasma TVs. Thus, OLED display TVs may well become the hot product of the next decade. Be sure to choose the right TV service so you can watch all of your favorite TV shows on your widescreen.