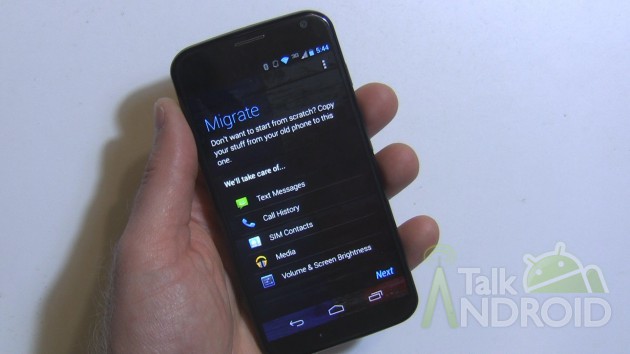 In the world of smart phones, has arrived a new droid phone by Motorola and this phone is the talk of the market. There are three versions of this phone which have been launched on partnering in technology with Verizon Wireless, namely Droid Mini, Droid Maxx, Droid Ultra and these were showcased at the press event in the month of July in the city of New York. All the handsets that have been launched have a quite bit in common and on the same time, vary a bit in features. The similarities of the sets that have been launched include the computing platform launched by Motorola which is the X8, the display is 720p, and the RAM is 2GB. On top of that, the camera that is incorporated in the droid phone is a High Definition 10 MP camera.

This is a flawless feature that is incorporated within the Motorola Droid and this helps the owner of the phone to migrate data from the older phone onto the newer phone without hassle. This helps in seamless transfer of media, call history, text history, contacts within the SIM as well as the contacts within the phone memory of the earlier device. This feature can be used by launching the Motorola App that is already incorporated within the droid phone. A code generated by the droid phone should be matched against the code generated by the other phone and the transfer can begin.

Droid Zap for the Wireless Display

This is an amazing feature that has been incorporated within the phone and this feature allows wireless sharing of data between android smart phones when they are in proximity with each other of around 1000 feet.  This method does not require NFC, Wi-Fi direct or even Bluetooth connection as it utilizes data connection so that files can be shared with other devices. This feature is available for download via Google for devices that are not droid. One of the major positivity of the feature is its fast response, and easy and seamless handling which makes it easily accessible. To make such a sharing feature secure is the lockable option in the phone, which requires the device at the receiving end to enter a pass code matching the one generated by the droid phone thus making the connection secure.

With the Motorola Connect feature, the owner can see the incoming calls as well as text messages even when the device is at a different location. This can be achieved using a personal computer or a laptop, with which the owner can tend to calls, reject them and read messages and even respond to them as per desire. Setting up of the same is quite an easy chore.

With this technology, a wireless display can be had on any supported device such as a laptop or a smart TV which allows the streaming of media from the phone on to the TV without the use of messy wires and without the use of a local router.