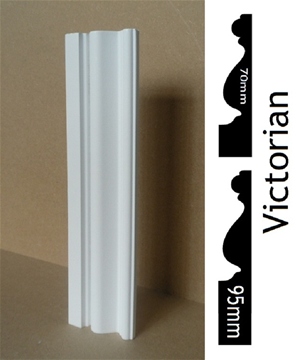 Interior decoration from the Victorian era is defined by its order and ornate nature. The Victorians were fond of separating their public and private space, with the public spaces filled with decorative surfaces as a bare room was considered as bad taste.

This ethos of Victorian design has transcended the ages and is still a popular design choice today, especially in wood turnings and architraves, the difference nowadays being the blurred boundaries between rooms and so the desire for this design whatever the audience. 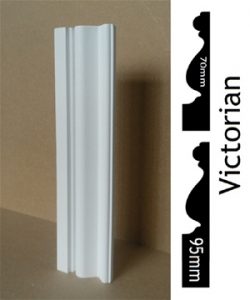 The History of Victorian Architecture

Victorian architrave was part of the architectural style in the UK during the middle to late 19th century during the reign of Queen Victoria. The British and French liked to name art or architectural movements after their monarch, with ‘Victorian’ following ‘Georgian’ and ‘Regency’ and preceding ‘Edwardian’. The style is an eclectic mix of Victorian interpretation of past styles and Middle Eastern and Asian influences, which crept in through international trade.

What is an Architrave?

An architrave is defined as the moulded frame that surrounds a door or window. It can be made from a variety of wood species, either left to its natural state, or painted to blend in with the adjacent wall and ceiling.

The 19th century was the time when the British Empire was truly established, and as a result of this, many architects took their British influences and transported them across the Empire. With the growing developments in communications, the Victorian style soon spread beyond the Empire. There are still examples of British architecture influences from this time shown in St. Peter’s Cathedral in Adelaide, and the Public Works in New York City.

Cheshire Mouldings provide some stunning examples of Victorian style architrave shown in the Torus and Ogee styles. The ornate nature reminiscent of the time is echoed in their curvature. Available in top quality Pine, the mouldings are expertly crafted to achieve the attention to detail so loved by our Victorian ancestors. The Pine can be kept natural to appreciate its organic beauty or painted to either blend or contrast with its surroundings. An interesting use of Victorian architrave is to paint the door and window surrounds in a darker colour to the walls to make them a contrasting ornate feature. This is also a nod to the gothic architecture, which partly influenced this period.

Victorian architrave is the perfect example of the fundamental ethos of this era, to take something basic and inject it with an ornamental style to transform it from solely functional to glamorous, especially in the home.