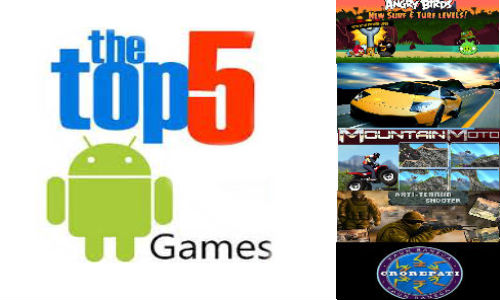 Last few years have gone amazing for the Android device marketplace. Especially the last year, in which many incredible Android smartphones and tablets were launched. The current year is going even better. This year started with CES event in which many high-end devices were unveiled. It’s quite interesting to see that along with the introduction of new Android devices, this mobile operating system is getting treated with new games and apps. Third-party developers are coming with amazing games and apps. It has become very tough to select a few games out of the huge crowd.

Well, you should not worry about the selection process, as we have done that for you. Check out the list of top 5 Android games 2013.

This game comes from the house of creators of Angry Birds. This is more than enough to speak about the fun that you get in this game. Amazing Alex Free is puzzler game that comes with 100 challenging levels across four fun-filled locations. The game has got many short physics-based challenges that seem to be simple to solve, but are tough actually. Not only the concept of this game is good, but the sound effects are amazing, too. You will not be able to stop yourself from falling in love with Amazing Alex.

The latest version of Temple Run is on second spot in this list of top 5 Android games 2013. Temple Run was huge success and you might have played that game. Temple Run 2 has been treated with more features and a better design. So it’s hell lot of fun to play Temple Run 2.

Ever played the popular game Angry Birds? That game is one of the most popular Android games ever. The latest version has been named as Angry Birds Star Wars. As the name says, in this game, the war takes place between Angry Birds and powerful pigs in the Space. The war contains use of super natural powers from both sides. Use your powers wisely or give up the game. Sorry! No other choice!

Like to feed the poor? Then do feed the poor monster who is trapped in the ropes. He can’t reach to little candy. It’s your duty to make a way for him by cutting the ropes. In this game, your finger works as sword. Don’t think about using this virtual sword madly, as your job is not to cut the ropes randomly, but in the way so that the monster can be feed. Don’t be pride after completing the job, instead, be ready for the next level.

Start game by picking any word from the given list of three. After doing so, draw it and ask your friends to guess the word. If they guess correctly, coins get added into your virtual fortune. Draw Something Free is the best social drawing and guessing game available for your Android device.

Please Read:  The 6 Best Games on the iPhone