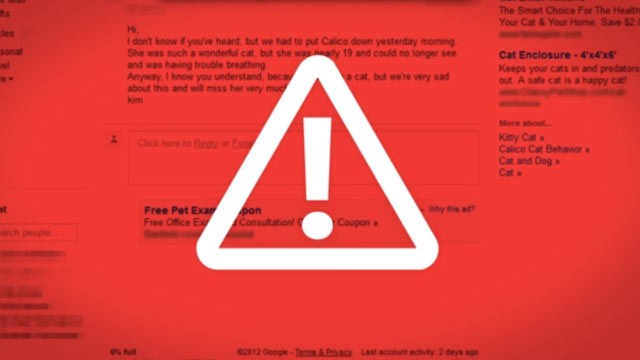 Microsoft has been exceedingly outspoken in its attacks on Google of late. In fact the tech titan has pulled no punches, lambasting its competitor over its customer policies and adds. Last December, Microsoft made the first big push in this corporate clash with the Scroogled campaign, an ‘innovatively’ titled awareness campaign targeting Google’s shopping policies. Google, Microsoft claimed, misuses its shopping service by turning it into a for-pay winner-takes-all service that deceives the users into thinking they are getting the best deals. The claims caused a stir through the marketing community but the campaign’s success was modest.

Well, Microsoft is back, this time targeting Gmail for its personalized ads and perceived lack of privacy. The fact that Gmail uses personal data to personalize ads is, of course, no new thing. It has been the very foundation of Gmail since day one. Yet a recent poll has shown that there is rising concern about the practice. A Pew report revealed last year that 75% of users disagreed with search history targeting, and amidst the recent changes to Facebook privacy data and the uproar over the Google terms of service last year Microsoft found a way in for its aggressive Bing promotion campaign. The recent debate over information security and freedom also made its way into the campaign with Microsoft pointing out the fact that all gmail e-mails are scanned by Google.

What does Microsoft stand to gain? It is unlikely that anybody will suddenly switch from Gmail because of security concerns that they were not already familiar with. What Microsoft can do is to create a slow but rising momentum against Google and create a better environment for their products to compete in. This, however is a stretch. A lot of businesses depend on Google, from the best seo marketing agency to the smallest  retailer who relies on AdWords for their sales. What Microsoft understands very well and is trying to change is that as long as Google is central to our Internet habits, from search to sales, it is going to be increasingly hard to compete with on the software side and by extension on the hardware side as well. If somebody is ensconced in a Google product world, they will find it a lot easier to work with Android  than Windows Mobile 8, and over time will likely favour a Chromebook over an equivalent Microsoft powered laptop. Microsoft has been there before.

Whether Microsoft likes it or not, Google reigns supreme in the internet world today, with most net specific businesses depending heavily on it. Microsoft’s campaign is quaint and might even be mildly successful but negative campaigns will not succeed unless backed up by superior products.