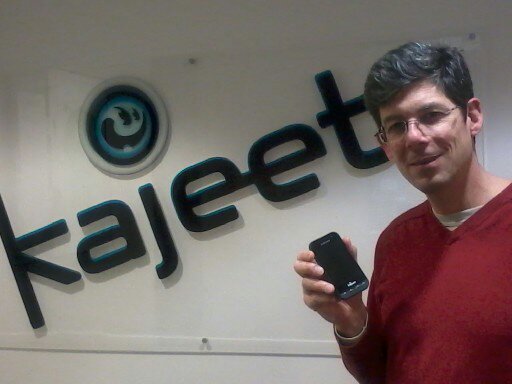 In a time where children are requesting their own cellphones at an increasingly early age, Kajeet Inc. is providing parents with a simple solution. Kajeet smart phones allow children to own their very own cellphones, empowering them with technology, while giving parents the tools to keep them safe.

Kajeet phones boast a few key features that make them the type of phones parents want their children to own. For example, the phone has a GPS locator that notify parents when their children arrive at school, home or sport practice. Parents are also able to manage their children’s internet access and set certain phone usage limits to leave kids with enough time for homework and enjoying the outdoors.

Originally founded in Bethesda, Maryland, Kajeet has developed rapidly in the past six years, securing numerous parenting awards for its unique service, including the iParenting Media Excellence Award. The company is growing from strength to strength and is fast becoming America’s answer to cellphone service providers for teens, tweens and younger children.

Like many success stories, the tale of Kajeet Inc. began with a modest start-up company. Three dads sat down to discuss how to connect their children with technology without exposing them to the harmful side of cellphone addiction and the internet. They came up with Kajeet – the name formed as an anagram for their own children’s names.

The company was founded in 2003, but the dads spent five years doing extensive market research in order to find their gap. In 2007, they released their first 3000 beta testers for cellphones. They kept things simple, enabling a user-friendly, pay-as-you-go service through the Sprint Nextel network, thereby excluding any contracts or cancellation fees. Parents simply upload money onto their children’s phones that they can then use to buy family-friendly games, ringtones and themes.

But every start-up needs a strong injection of entrepreneurial knowledge to make it in a world where new companies open up daily. That’s where entrepreneur Rick Bolander, one of the three founding fathers, stepped in to get Kajeet Inc. off the ground. Boasting 12 years of experience in the venture capital industry and having co-founded Gabriel Venture Partners in 1999, Bolander not only put his entrepreneurial skills to work, but also helped the start-up with a substantial financial boost. He currently serves as a non-executive chairman of Kajeet and a range of other companies.

Today, Kajeet offers their services to cellphones as well as smart phones and tablets. The ‘Shop Phones’ section of their website provides a wide range of devices, including recent Samsung, LG and HTC smart phone models. If you or your child already own one of the supported phone or tablet models, you can even activate it on one of Kajeet’s plans for free.

Kajeet Inc. is a great example of how an original, innovative idea, partnered with strong entrepreneurial expertise can lift a start-up company off the ground to become a successful, and respected service provider in a modern, technologically driven era.