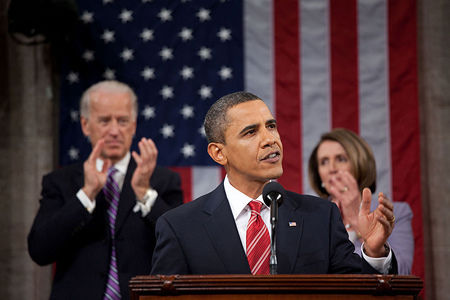 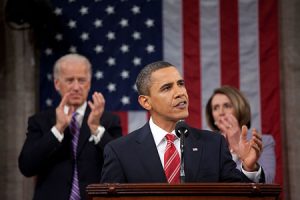 President Obama’s 2013 State of the Union address (SOTU) marks a milestone for the renewable energy and environmentalist movement. Obama’s SOTU contained the most mentions of climate change in the history of this important speech that sets the tone for and outlines the goals of a presidential term. Obama’s focus on green energy is significant because it underscores a shift in priorities – toward not only recognizing climate change as a significant threat, but also attempting to implement the tools needed for positive change in society. This article will explore the impetus for recent government action on climate change, as well as the future goals of the Obama Administration to reduce pollution and combat climate change for a more sustainable future.

One primary reason for the US government’s focus on renewable energy is the desire to increase energy security in the US. Investing in the green energy market (in the form of solar power, wind power, hydropower and natural gas) leads to a decreased reliance on foreign oil – an energy source that is often subject to the intricacies of international politics, war and unstable economies.

Obama’s desire to increase renewable energy is likely focused on the goal of controlling where America’s energy comes from, how much it costs, and how much the US is reliant on other nations. Instead of being drawn into expensive foreign conflicts, developing a robust national energy system can help isolate critical foreign policy decision from the international energy market, gaining the US a competitive political advantage. Monetary reasons for renewable energy are also significant. As mentioned by Obama in the SOTU, another benefit of investing in renewable energy is the dividends in the form of new jobs in the US. Tens of thousands of new green jobs have been created to date.

Climate change policies in the US are not all about politics, money or energy security, however. With the twelve hottest years on record all recorded within the last 15 years, global warming can no longer be ignored or argued away. Natural disasters, such as Superstorm Sandy, wildfires and floods have all been magnified by climate change. The Obama Administration therefore used the SOTU to make a strong case for the need for immediate change to safeguard the world we leave our children. The goal of leaving future generations with tools for sustainability must begin today, according to the SOTU.

In addition to recognizing climate change concerns, Obama also used his SOTU to discuss achievements reached in the past few years. These achievements include increased wind energy that added almost half of all new power capacity in the US. Solar energy was also a focus as one of the most promising ways to jumpstart energy efficiency in new industries. With solar power plants successfully emerging from Florida to California, the benefits of solar energy continues to stimulate its development.

While the Obama Administration has made progress on climate change initiatives in recent years, there are still several barriers to confront in Obama’s new term. One major and monumental barrier is coming to political agreement about drafting new laws on both the state and federal level. While Obama has made clear his goal of energy awareness and efficiency, the administration must use all of its political leverage to persuade congress to adopt long-term energy policies. This will require bipartisan agreement on issues such as limiting business interests, approving increased government subsidies and determining an appropriate level of free market interference.

Obama’s recent nominees to the position of Environmental Protection Agency’s clean air chief and head of the Department of Energy are well suited for the challenges that lay ahead. The new EPA chief, Gina McCarthy has been involved with climate change issues for years as head of the EPA’s air-pollution efforts during Obama’s first term. Similarly, Ernest Moniz, the new DOE leader was a key DOE official during the Clinton administration. Both nominees have been praised for their choice of pragmatism over ideology in pursuit of energy goals. This pragmatism will be much needed as Obama attempts to match his ideals with the realities of Capitol Hill.