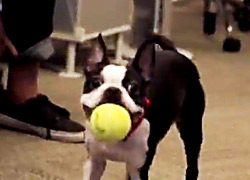 The goal of the online video series from Beneful is to offer a joyful experience while playing the videos for all the users and to remind them how the game can make a transformation everyday.

The great theme “Random Acts of Play” which were created by Leo Burnett and Arc Worldwide was launched in the popular YouTube in the earlier part of this month. The launched series has three original videos as its main content.

“Play It is good for you” is one of the Beneful’s viral videos that offers totally a new experience when played through social channels. The extensive campaign aims on the benefits of the game and explain how you can be happier and healthy with a funny time with your pet dogs.

The ‘hero’ Webster is a dog featured in the video series brings a new experience for the people on the streets as well as change the moods of workers in the office.

The three videos will surely get happiness to the users and the titles are listed below:

As an online marketing strategy advertisements were created in the Facebook to drive the online traffic on the You Tube. This online campaign is well supported by a good PR initiative. The video enthusiast can see the video series on Beneful’s social media channels like Facebook, Twitter and You Tube.

Jamin Hemenway, Brand Manager from Beneful reports that the Beneful company strategy is mainly aimed for creating more inspiring plays for the world as the Company believes play is an essential part of our life that offers benefits to the dogs as well as the individuals who love the dogs.

Hemenway added his views to the Marketing Daily that playing with the dogs make both the dog and the its owner to feel invigorated happy and healthy.  “The “Random Acts of Play” video series helps to spread the joy f by engaging social contents which features few fun loving dogs which offer more thrills in the most unexpected places” he added.

While talking further about the new Beneful video series, Tony Rogers, Vice President and Creative Director for LEO Burnrtt/Arc Worldwide has said that the idea behind the “Play. It is Good For You” is to bring  the concept of life by featuring the most ridiculous playful dogs in everyday life situations.

As reported to the Marketing Daily by Rogers that the dog featuring in the series as Webster who has infectious and possess single minded obsession with the tennis ball. According to him the Beneful’s Art Director Alex Fendrich has his Boston Terrier was named as Webster in the entire play.

The video series is provided with great music and the tune of “Bad Sports’ is primarily used in the entire play.