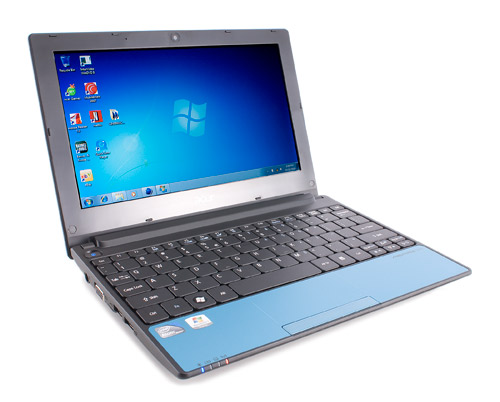 Acer is one of the companies that are very competitive when it comes to pricing their notebooks. Sometimes, one may even wonder if they even gain any profit from it. One new and competitively priced notebook is the Acer Aspire One AOD255-1203.

The Aspire One AOD255-1203 is known for being very thin for its size. Its thickness is only 0.8 inches and its total weight is a mere 2.5 pounds. For a 10-inch netbook, that is very light. This makes it easy to carry around with you.

The presence of the Intel Atom N550 on a cheaply priced netbook is a huge help in improving the publicity of the Aspire One AOD255-1203. This processor has two cores effectively doubling processing speed as compared to the original Atom model.

The screen is not that great, however. The AOD255-1203 has a 10-inch screen but is unable to provide 1366×768 resolution unlike some 10-inch and all 11-inch netbooks. Nevertheless, it is the standard for 10-inch netbooks so we cannot blame the manufacturers. On the plus side, a full size keyboard is provided so that the user feels comfortable when typing. There aren’t a lot of full size keyboards found on 10-inch netbooks. This gives it an advantage over others. Additionally, the touchpad is responsive and the mouse buttons do not make noises anymore when clicked. This is in reference to previous models that are guilty of this.

Aside from the dual-core processor, the Aspire One AOD255-1203 has pretty basic features. It has the standard ports and webcam that is present in almost every other netbook. The hard drive is also a standard 250 GB and 5400 RPM one. Even the RAM installed is not spared. It has only 1GB installed and there is an even bigger problem. The memory slot is much secured. You would need to remove around seven screws to open it. There are some netbooks that only require 1 to 2 screws and even some that are unlatched without screws.

Despite its simplicity, the Aspire One AOD255-1203 is really a big seller due to its cost-effectiveness. It is regarded as the cheapest netbook to have a dual-core Atom processor and a full-size keyboard. Its battery life is also worth mentioning. Despite having only a 49Wh battery, it still manages to survive for 7 hours and 42 minutes. That is a bit low for a 10-inch netbook but again, consider the price, it is more than enough.