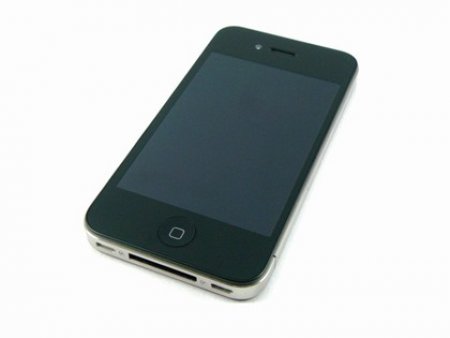 What is new in this device? First of all – absolutely new display with the smart permission 640?960 pixels (at HTC Touch HD2 – 480?800).
The second interesting moment – powerful processor, and just the same that is always used in iPad.

Well and the third innovation is a 5 mega pixel camera and possibility of record of HD-video.Appearance iPhone 4 has transferred appreciable changes. The back cover became now glass. All lateral faces at iPhone 4 steel – looks now it very stylishly.

The starting screen looks almost the same as and earlier, however at once attracts attention the pictogram of “Utility” which hides the whole set from several programs.

The major innovation in the fourth model is function of the simultaneous decision of several problems. It is realized approximately in the same kind, as well as in Android: now at an exit from the appendix it isn’t unloaded, and remains in memory. The list of the loaded programs is caused by double pressing of key Home – it is deduced in the bottom panel.

At the chamber became five mega pixels, there was an auto focus which also can be regulated (on the image to point a finger at a proper place – there type as well as auto focus), flash.

But results thus are predictably, modest enough. The balance of the white limps, auto focusing doesn’t rescue from often appearing confusion when you remove concrete subjects, instead of close ups.

Though it is necessary to notice that on iPhone 4 chambers are started much faster, and works – so simply with speed of a sound that very much even it is good.

There is a voice control. It has appeared since models 3GS. It is made very competently and really works. Vocal control by long pressing of button Home is caused – to hold about pair seconds. In vocal system keywords are put: start-up to call, type, to the subscriber, number, and the following song, to reproduce the actor such, to reproduce a song such and so on. That is it is intended for a call of subscribers and reproduction of certain music. After occurrence of the first iPhone 4 on the Internet spoke about a problem with sharp falling of level of a signal when you take the device the left hand much – the palm thus closes the aerials which have been built in a fringing of a face part, and signal level falls on pair units.

If communication not especially steady then falling on pair units can cause signal loss. The reason in that as we hold phone. When you take a phone not in usual way. At me this effect was quite often shown, when level was not full – 3-4 strips. You take in the left hand – two strips fall off. Before full loss, truth, haven’t fallen off ever. Despite such rich screen, the battery quite pulls it. For some days of usual use of the battery always sufficed for full day, and at not especially active use – for two days and even it is more. The screen at iPhone 4 on quality – absolutely fantastic and, certainly, best of everything that is at present. If in comparison with iPhone 3G the screen of mine HTC Touch HD2 looked more abruptly on an order now screen HD2 obviously concedes to the display iPhone 4 which and surpasses it in the permission, and on brightness, quality and chromaticity – is simple on a head above.

Speed of work at iPhone 4 is excellent. 3G was model enough slow, 3GS became more bright, but there is not enough, and only 4 – simply flies, only have time to splash fingers on the screen.

In the fourth version iOS at last there was a function of the decision of several problems simultaneously.

Unique problem in all it – high enough price which it is necessary to pay for such beautiful toy. But beautiful toys always cost much. Why? Nobody knows. Scientists just should explain this mysterious fact.