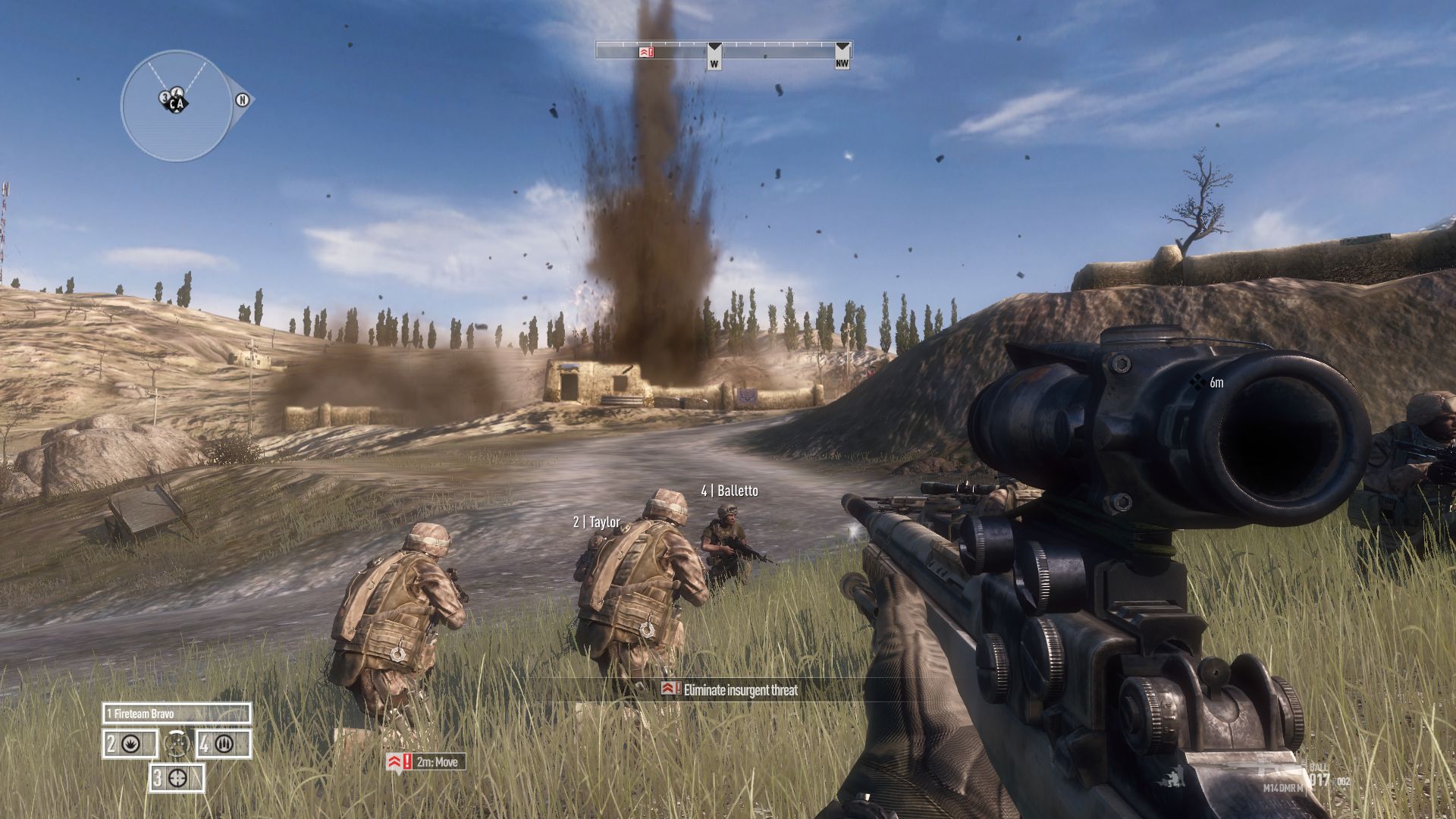 Just as serving a delicious cheesecake on a bed of rotten mackerel kills the appetite, so OpFlash: Red River turns the stomach with its nauseating intro. No matter how appealing the main event might be, you just can’t get that image out of your head.

In a punishingly tasteless opening FMV, you’ll see a visual demonstration of piss on cornflakes seconds after the 9/11 attacks are made fair game for one liners in a potted history of east-west relations as told by morons. It’s as if Codemasters are saying, ‘Try and enjoy the game after THAT, suckers!’.

I tried to enjoy it after that. Shaking my head vigorously to try and loosen the memories, I started the campaign. I began to soften to the U.S. marines the game plays out around that spouted all that puerile nonsense in the beginning. They seemed to get it all out of their system and once I was riding shotgun in a Humvee through Tajikistan with them, I felt that we bonded. The eastern mountains painted by rosy dusk, artillery fire playing out a staccato accompaniment to our journey through dusty twisting tracks. It was almost romantic.

And then suddenly I’m running around cluelessly, running for cover from the insurgent forces that crashed our party. My ears are hot with radio communication. Riflemen at all angles, none visible to me. Tracer fire running over my head like dizzy fireworks. Three marines, standing behind me, alert and waiting for my orders, confident I’ll keep them all safe. I don’t share their confidence

We hole up in an old farmhouse and pick off a few Tajis. Alpha and Charlie companies are reporting dead marines but I’m damned if anyone checks out of my Bravo team. I heal them all furiously as they bravely shoot through the pain.

The monstrous noise like a thousand bones breaking eases up. Radio noise settles down. The insurgents lay at awkward angles in the hills around us, some twitching. As our transport out of this hellhole arrives, I walk past one still alive by the roadside. I shoot him in the face. There are empty seats in most of the Humvees now, but the bravo company vehicle is full. I look into the bloodsoaked faces of my marines. You are forgiven, I tell them.

That day we all became men, and men are proud creatures. There’s no place for pride in war though, as I found out by selecting ‘hardcore’ difficulty for the next mission. The red waypoints I’d been chasing after to try and find some order in all the chaos were now gone. I used to be able to recognise my squad mates, but now they blended into the other grunts. What’s more, without scoping in, I no longer had a crosshair. I was going in blind and the Tajis would be waiting. ‘Squad. Form up on me.’ I said, in that inimitable, charisma-less way I have.

More chaos, more gunfire, more dead marines. Soto. He was a good shot and a family man. Bravery killed him. I ordered him behind cover, but Soto couldn’t bare the thought of a single Taji escaping. Again and again I urged him into safety, but the adrenaline was coursing through his veins. Soto didn’t listen, and took one in the neck. Taylor rushed to help him. Rushed straight into enemy fire. A goddamn pile of dead marines.

It must have got to me, losing men on my watch. Staff Sergeant Knox told me to order in an air strike, but I had no idea where. I missed Soto and Taylor, but I missed the red markers that told me what to do even more. I took a guess and ordered in a strike on a suspicious looking building and failed the objective.

Time passes. I get sharper at shooting. More men are assigned to my squad. They’re also called Soto and Taylor, and this poetic coincidence reassures me. Ordering these men about is easier for me now. I have them lay down a suppressing fire on the enemy while I flank them, or sometimes I suppress and they flank. By and large they obey me but I can see a bit of that old Soto bravery in new Soto. They just don’t have that survival instinct, poor brave bastards. Staff Sergeant Knox’s 10 rules echo through my head every time we engage insurgents. ‘Don’t get shot’. ‘Avoid confined spaces’. ‘Suppress and flank’. Funny, those words help me as much as the red waypoints now.

The Chinese get involved, things turn sour fast. I’m on a co-operative mission with eagle-eye Thornett. He’s handy with a stinger and smart with cover. Together

we hold off a massive wave of PLA forces. Then another. Another still. Funny, but I know I’m going to die out here, and all I can think is ‘this game serves as a pleasing middle-ground between soldier sims like ArmA II and linear shooters like COD. Sometimes it’s not clear what you should be doing and the AI is imprecise, but the way Codemasters have utilised the memorable and vivid terrains makes for a rewarding pseudo-soldier sim’.