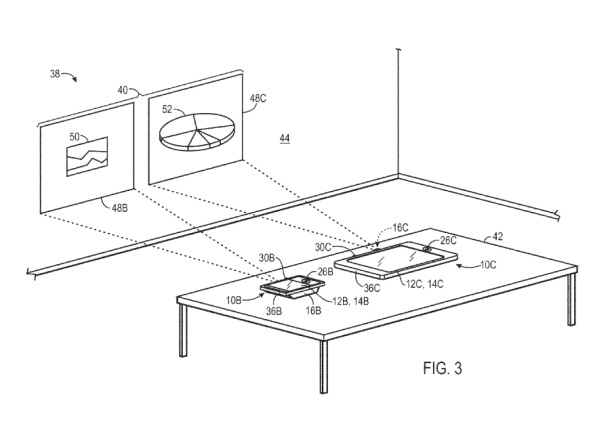 A newly published Apple patent application has provided additional hints that projectors could one day end up in future Apple products, including the company’s phones, tablets, and as an accessory for notebook computers to help make it easier to share content with one another.

The application “Projected display shared workspaces” was filed in February 2010 and pulled up this morning by Patently Apple. It outlines a system for taking what’s on screen and projecting it onto a nearby surface. What’s interesting about the system proposed in this particular patent filing is that it can combine projections from multiple devices into one screen, in what’s dubbed the “shared workspace.”

The application notes that “consumers frequently share data stored on electronic devices with other people,” but that portable devices typically come with small screens, making it difficult to share with a group. The company’s solution promises to solve that by offering a way for devices with projectors to link up to one another in order. The end result is a larger canvas for presenting media and other documents, using a sever or a close-range transfer medium like Bluetooth, ZigBee, or near-field communications (NFC) to ferry the data back and forth between the devices.

Of special note is that Apple has been tied to the domain name of Applepico.com, something blog Macrumors discovered last week. Handheld projectors–which have cropped up on a number of point-and-shoot cameras, cell phones, and as standalone devices–are commonly referred to as “pico” projectors.

Miniaturization with pico projectors continues, with newer technologies bringing down the physical space and power needed to put built-in projectors into portable electronics. A new lens announced last week by Alps Electric is on the edge of that trend, measuring just under a millimeter squared. The company plans to produce those units in bulk by the end of next year.