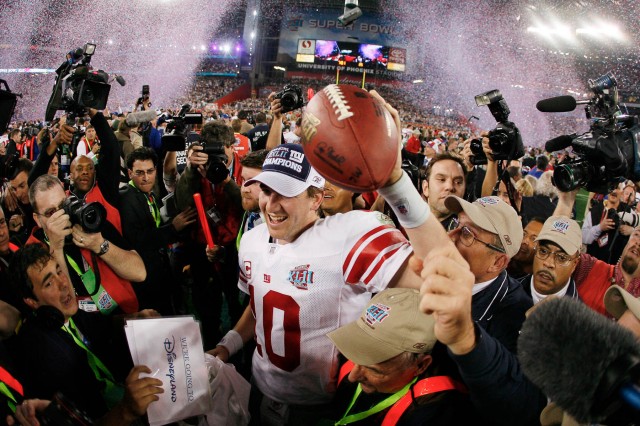 For this list, we’re looking at those teams that either started the season slowly, went into the playoffs as underdogs or were just heavily favored to lose, but that ultimately triumphed when it counted.

While we considered Miracle on Ice as one of the greatest underdog stories ever told, we decided to exclude it as that famous game was not actually for a championship title.

Here is list of Top 10 Amazing Championship Winners in Sports History with picture:

Starting the season with a 16-22 and struggling through injuries to all three of their top pitchers, the 2003 Marlins didn’t look like a team on the verge of a championship. But there they were in the postseason, defeating the lovable losers known as the Chicago Cubs in probably the most contentious NLCS series in MLB history. Ultimately moving onto a World Series matchup against the dreaded Yankees, Florida proved that baseball was about more than who had the deepest pockets, and did so in a David and Goliath final series against one of baseball’s most storied – and richest – franchises. In the process, they gave a tremendous amount of hope to other clubs in so-called small markets around the nation.

The previous season, they’d failed to make the playoffs. Star player Jean Béliveau was about to retire. And – according to some players – their coach Al MacNeil was “incompetent.” As the Habs entered the playoffs in April 1971, they decided to make things even harder for themselves by inventing the goalie controversy: instead of calling on starter Rogie Vachon, they selected a youngster with only six professional games to his name. Fortunately, Ken Dryden became the backbone of a stellar squad throughout the post-season, impressively leading Montreal to a first-round upset over Boston and eventually bringing them to the finals to face the formidable Chicago Blackhawks. Chicago took the first two games, but the Habs came back to force a game 7 and eventually hoisted the cup – against all odds.

In their final regular season game of 2007, the New England Patriots beat the NY Giants, making history as the first team to go undefeated in the 16-game era. New York still ended their season with a respectable 10-6 record, finishing second in their division and entering the playoffs as a wildcard team. Then, the Giants went from witnessing history to making it: playing against the Pats in Super Bowl 42, New York was down 14-10 in the fourth-quarter when David Tyree kept the Giants’ comeback drive alive by catching the ball with his helmet. Eli Manning put the final nail in the coffin with a game-winning touchdown pass to Plaxico Burress moments later, killing the Patriots’ hopes of a perfect season for good.

Ending an 81-year drought without an English title, the Blue and Whites won the league in just their third season back to the top tier of English football. Under legendary manager Kenny Dalglish, Rovers finished the season just one point ahead of second-place Manchester United, narrowly winning the league title despite a 2-1 loss to Liverpool on the final match-day of the season. Blackburn striker Alan Shearer scored an astounding 34 goals that year and was awarded the Golden Boot as a result. Their success may be behind them, but Blackburn fans will always have that dramatic Cinderella story of 1995.

Villanova’s upset over Georgetown in the NCAA tournament final is among the greatest games and the biggest upsets in the history of college basketball. Georgetown entered the tournament as the reigning champions and a number 1 seed with only 2 losses in the 1984-85 season. Plus, they’d already beaten Villanova twice that year. On the other hand, Villanova was a number 8 seed with a 9-7 record. But it didn’t matter: on the biggest stage in college basketball, and up against the seemingly unbeatable Georgetown Hoyas, the Villanova Wildcats put everything on the line, winning the nail-biter with a final score of 66-64, earning their first-ever NCAA title and becoming the lowest-seeded team to ever win the tournament.

Denmark actually failed to qualify for the 1992 UEFA Euro. But, Yugoslavia in the midst of civil war, so with less than two weeks before the first match, Denmark was called up to take their place. As a result, some teams underestimated them. Placed in a group with France, England, and Sweden, no one really believed Denmark could make it to the knockout stage – well, except the Danes. The team escaped the group stage, facing a strong Dutch side in the semi-finals and winning via penalty kicks. Their greatest challenge was facing Germany in the finals, where most believed their luck would run out. But, as fate would have it, Denmark beat the Germans 2-0, and were crowned European champions.

In only their eighth season as an MLB franchise, the Miracle Mets won their first World Series title. What’s so miraculous about that? Well, in their previous seven seasons, the Mets had been a sub-par team that never finished higher than ninth in the National League – which only had 10 teams at the time. Needless to say, no one expected them to turn things around so quickly. But, they did: the Mets finished first in the newly created National League in 1969 and went on to face a dominant Baltimore Orioles team that’d swept the Minnesota Twins in the 1969 American League Championship Series. The Mets beat the Orioles in 5 games, a major step up for the expansion franchise.

The Baltimore Colts came into Super Bowl III as the heavy favorites, finishing the 1968 regular season 13-1 and blowing out the Cleveland Browns to punch their ticket for the final against Joe Namath’s New York Jets. While most pundits and sports broadcasters had basically already crowned the Colts as Super Bowl champions, Namath guaranteed a victory for his team. Turns out that may’ve been the vote of confidence they needed going into Super Bowl III, as Namath kept his promise in spectacular fashion. In perhaps the greatest upset in NFL history, the Jets shocked the Colts’ Hall of Fame quarterback, Johnny Unitas, allowing just one touchdown pass in a game that finished 16-7 for the Jets.

They had almost been relegated the previous season and were given 5000-1 odds of reaching the top of the table. But the Foxes shocked bookmakers and the football world by going on an unbelievable run and winning the Premier League title – their first ever. Not only that; but Leicester only lost three games in the process. Led by surprise sensation Jamie Vardy, who set a record by scoring a goal in 11 consecutive games, along with winger Riyad Mahrez and midfielder N’Golo Kanté, manager Claudio Ranieri’s squad surpassed all expectations in a league filled with some of the best clubs and players in the world.

Greece entered the 2004 Euro as underdogs, qualifying for the tournament for just the second time in the team’s history. They barely made it out of the group stage, squeezing their way through on goals scored, and facing a strong French squad in the quarterfinals. Despite the strength of their competition, Greece managed to make it into the final against host country Portugal; a team stacked with world-class talent that included a young Cristiano Ronaldo. And, in a tournament full of upsets, the final proved no different: Greece defeated Portugal 1-0, playing the conservative style that’d brought them to the final in the first place. Even more impressive: prior to the 2004 Euro, Greece had never won a single match at any major tournament.

Hi, i am Victor C. Koontz from Bloomfield, NJ 07003 of USA. I am big fan of sports and also have a sports free live streaming site that’s name is  MySportLiveStream. There, you can watch any live sports smothly on your smart devices for free.