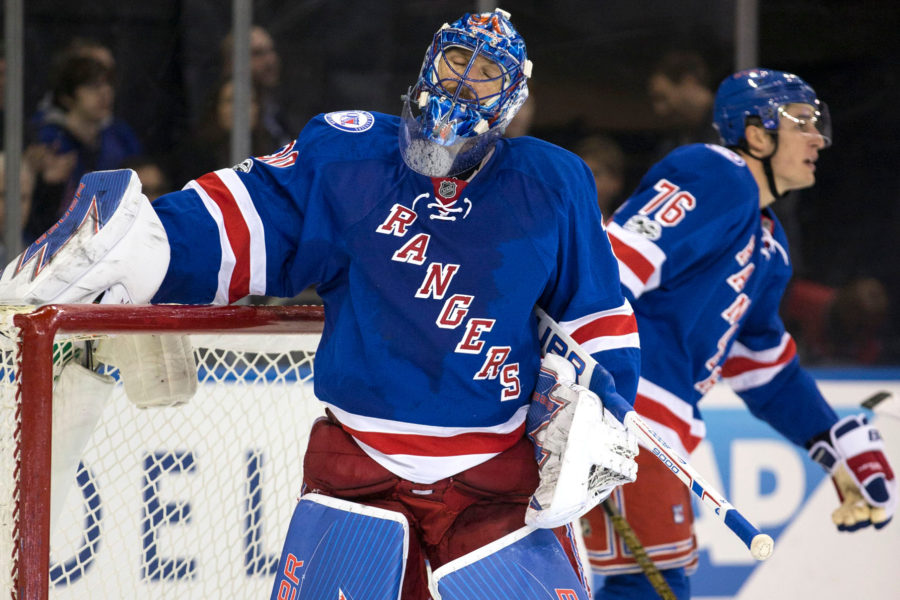 Henrik Lundqvist was the 205th overall selection in the 2000 NHL draft. In 2005, he made his debut for the Rangers and has held the starting goaltender job ever since. At age 34, he is closer to the end of his career than the beginning. However, it doesn’t mean that he can’t still be a productive goalie for many years to come.

He Doesn’t Look to Be Slowing Down This Year

In 2016, Lundqvist has played in 25 games posting a 15-8-1 record and a 2.47 goals against average. His goals against average as well as his save percentage of .915 percent this season are relatively close to his career averages. Therefore, the team can be confident that there is no need to look for other options in goal should it make the playoffs this year.

How Much Longer Can the Rangers Rely on Lundqvist?

There is historical precedent for goaltenders playing well into their 40s. Dominik Hasek played a high level until his retirement at age 43 and even won a Stanley Cup for the Detroit Red Wings in his final NHL season. Martin Brodeur was 41-years-old when he retired as a member of the St. Louis Blues and led the New Jersey Devils to the Stanley Cup finals when he was 39.

Having a Reliable Backup Will Prolong His Career

The easiest way to reduce the longevity of an NHL goaltender is to make him play all 82 games in a season. While it may be necessary to use one goalie every night in the playoffs, there is generally no excuse to force one man to play every game in the regular season. At a minimum, the backup should be asked to play when the team has games on consecutive nights or three games in four days. Lundqvist hasn’t played more than 65 games in a full season since 2011, which means he should remain fresh from the foreseeable future.

How Much Will He Play for Sweden’s National Team?

It will be interesting to see how much he plays for the Swedish national team as he continues to get older. While international hockey doesn’t offer the same type of grind that the NHL season provides, there is always a risk of injury when playing competitive hockey.

The Rangers have had a genuine star manning one of hockey’s most important positions over the last decade. While he currently shows no signs of slowing down, no player can continue his career indefinitely. Fortunately, history shows that goaltenders can play well as they approach 40 and beyond, which means Henrik Lundqvist could have another five to seven years of quality play ahead of him.