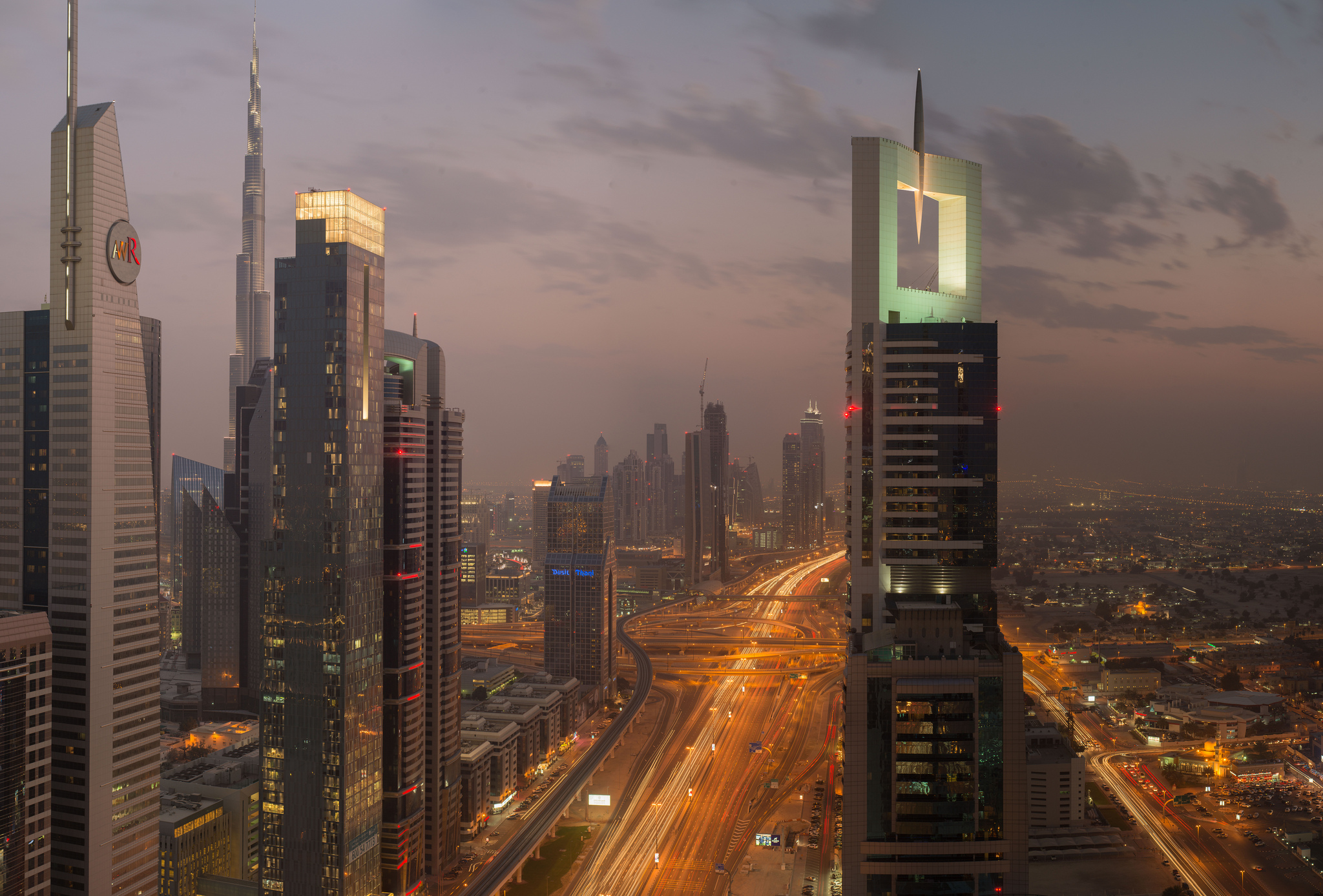 Dubai is famous for its modern architectural design. The city is growing not only in breadth, but also skyward. There were even plans to build a kilometer-tall skyscraper “Al Burj” (Nakheel Tower), but due to the global financial crisis, this costly project was canceled in December 2009.

Still, there is much to be seen in Dubai. The skyscrapers are as fascinating at a distance, as they are up close. If you rent a car in Dubai, you would be able to become personally certain in it within minutes. The next skyscrapers are capable of astounding you.

The highest and the most famous skyscraper in Dubai is the Burj Khalifa tower, the construction of which began in 2004. Towering above the ground, by almost 830 meters, the 162-storey building became the highest ever-constructed freestanding structure in the world. Thanks to its unique design, resembling a rocket, it seems that the building is about to swiftly soar into the air.

“The tower of Khalif” is a large-scale and innovative, architectural and engineering feat of recent years. It literally pierces the sky! For comparison, its height is seven times the height of London’s Big Ben. The opening of this grand skyscraper took place on January 4, 2010, just six years after the construction has begun. About 13 000 workers, day and night, worked tirelessly to ensure that every new floor of a giant structure was appearing no later, than three days after the previous one. Now in this “Tower of Babel” of Dubai there is a great number of office premises and private apartments. There is also the well-known Armani hotel – the first hotel in the world, which interior decoration was fully developed by the Italian designer Giorgio Armani.

Of the most interest to the visitors is the observation platform, located on the 124th floor of the Tower. Those fearless, who dare to ascend on the high-speed elevators at 442 meters above the ground, a truly worthy award awaits – incredible in its beauty and scale, panorama of Dubai. People say that it is best to watch the beauty of the city from a bird’s eye view from 16 to 18 hours. In that time, there is an opportunity to compare day Dubai and the evening one, as both of them are having their own charm. In order not to deprive yourself of such pleasure, it is best to buy the tickets beforehand, for example, on the official website of the Burj Khalifa. 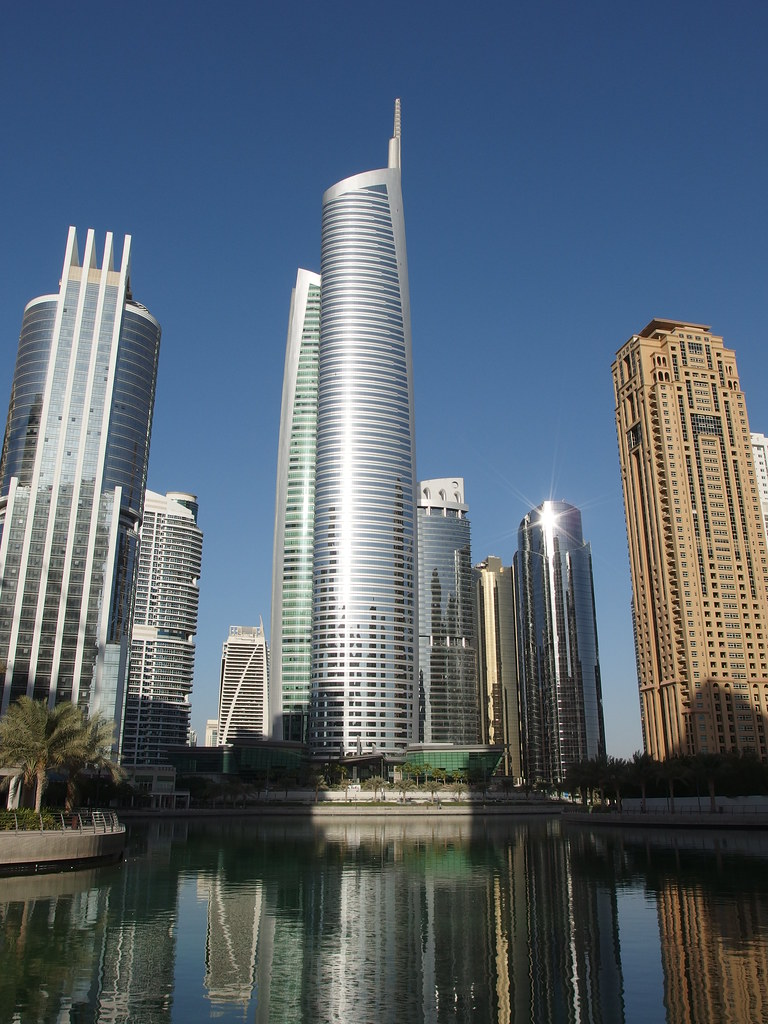 The Diamond Tower, 360-meter tall skyscraper in the city of Dubai, is having 74 floors, 70 of which are used for commercial purposes, and four are the technical floors. Its construction began in early 2005 and lasted for 4 years. For 2015, the Tower was the fifth tallest building in the city.

The building is located on an artificial island in the middle of the cluster near the Jumeirah Lace. The tower was designed by the architectural company Atkins Middle East. The Dubai Diamond Exchange and offices of companies, engaged in the sale and shaping of diamonds, jewels and pearls, are located in the building. In addition, there is the Dubai Gems Club, the Dubai Pearl Exchange, the Kimberley Process Certification office, meeting rooms, and the offices of companies involved in the guarded transportation of jewels.

This is a complex of buildings, consisting of two skyscrapers, located in Dubai, on the Sheikh Zayed highway. The height of the first, Emirates Office Tower, is 354.6 meters. It consists of 54 floors, where only the offices are located. This Tower is 38 tallest building in the world.

The second, 56-storey tower of five-star Jumeirah Emirates Towers Hotel is 309 meters tall, what makes it the third tallest hotel in the world. Consisting of four hundred rooms, 10% of which fall in the lux category, the hotel is the fifth tallest buildings in Dubai. Its construction was completed on April 15, 2000. The building has floors one floor especially for women and one more floor-specially for men. On the first floor, women may read fashionable magazines, practice yoga or visit a beauty salon. For the representatives of the stronger sex, there is a magnificent SPA center, with an “oxygen room” and a hydro-pool, where they can relax. Special attention should be paid to the hotel rooms of the tower. There are huge windows, from which you can see the city in details, including the beauty of its sights. Each room is equipped with the modern appliances.

Abutting in the sky, the Emirates towers were built of concrete and glass. Especially fascinating the twin towers look in the evening, when the buildings are illuminated from all quarters.

Both skyscrapers are standing side by side, and they are even connected by huge shopping center Emirate Towers Boulevard. The architecture of the towers is not very different from the general “style” of Dubai, but they are having a catchy feature – two thin spires, pricking up into the sky. Their upper floors command a stunning panorama of the city and its surroundings. The complex has a wonderful 25-meter outdoor pool.

The Rose Tower, 333-meter tall building, is located on the Sheikh Zayed highway in Dubai. For 2015, having 72 floors, it was the 55th tallest building in the world. Initially, the height of the tower was planned to be 380 meters, but with the further design, it was reduced. The construction began in 2004, and, 2 years after, it was completed and a spire was installed. The hotel was opened in April 2008, though, the official opening took place only on December 23, 2009. 180 million dollars were invested in the construction of this skyscraper. The Rose Tower hotel is the second tallest hotel in the world.

Today, the “Rose Tower” is offering the plushest rooms and other delights of a first-class hotel. The service there is at the highest level. It was one of the first hotels in Dubai, where the sale of alcohol was permitted. This fact attracts many foreign tourists. There are two restaurants and a café, working round-the-clock.

Aspiring towards the heavens, the hotel is having 482 luxurious rooms. The guests are offered the apartments of premium room, suite, deluxe room and classic room types. As for the infrastructure of the hotel, it includes a business center, eight meeting rooms and other public halls.