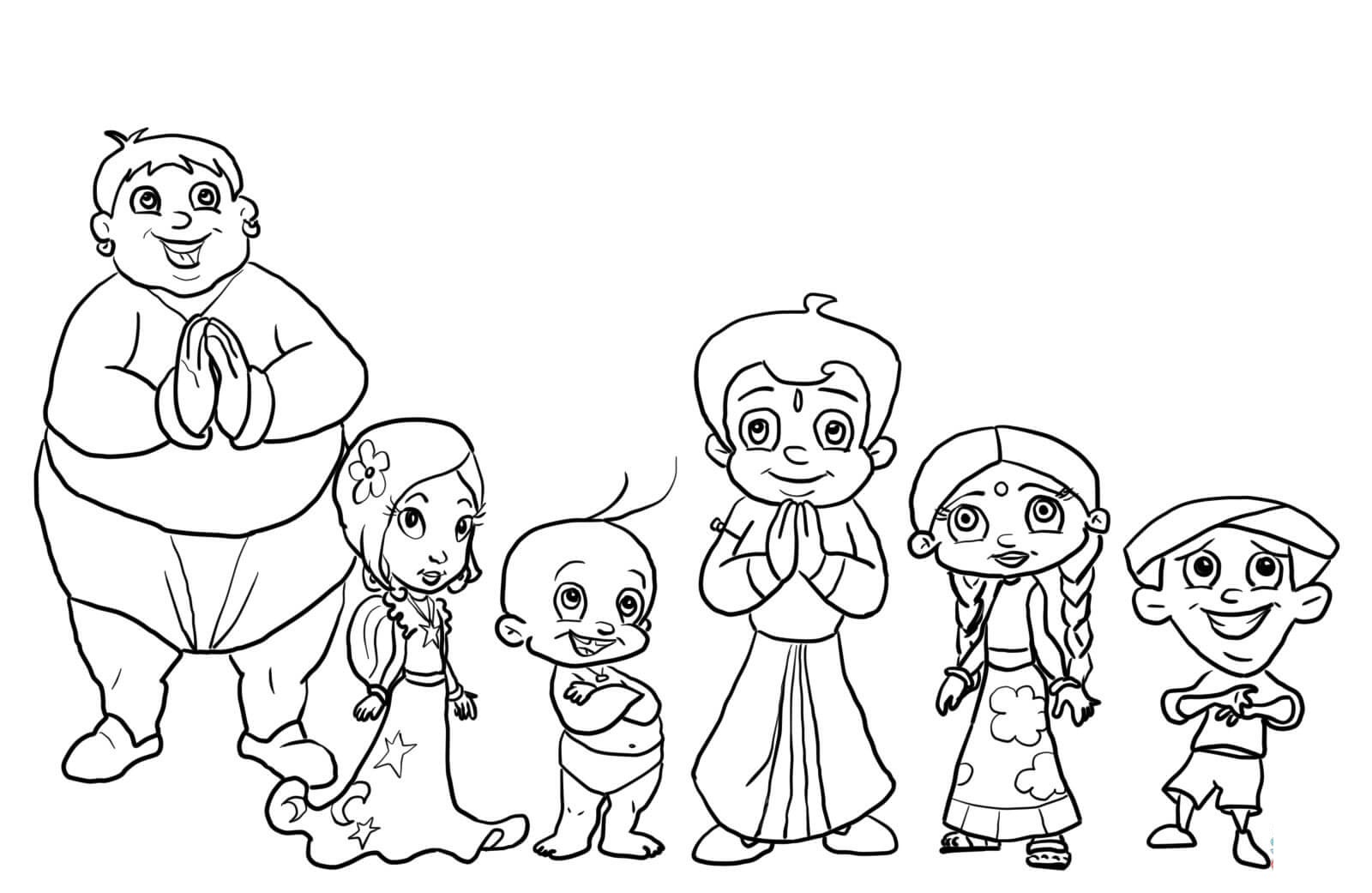 It is no doubt, Chota bheem being a number 1 animated cartoon stands on top position. It beats all other cartoon serials on the basis of TRP, Chota bheem is favourite cartoon character for Kids. Many kids always involve with Chota Bheem gadgets whereas some involve in Chota Bheem Drawing. All these Kids, make him a big cartoon hero.

The Chota Bheem series is a combined effort of Rajiv Chilaka, the CEO of Gold Animation with Raj Viswanatha, Arun Shendurahar, Nidhi Anand and Sonam Shekhawat as writers. It is broadcasted on pogo tv.

This series initially was broadcasted in hindi, english, telugu and tamil, but the popularity rised touching the peak, and it started to broadcast inn various more languages like urdu, kannada et cetera.

This series revolves around the plot: The strong Bheem, a fun loving nine year intelligent and brave boy of Dholakpur city. The story centers Bheem and his friends and their rivalry with Kalia and his friends. Other kids of the Dholakpur city are the supporters of Bheem, as he comes to their rescue while in a problem. He has also defeated some enemies in and around Dholakpur like the demon Kirmada, Kichak and Mangal Singh. Bheem earns the trust of Dholakpur and Raja Indravarna and is believed to marry princess Indumati in the future.

The characters in the series: Chota Bheem: the protagonist of the series. He is an adventurous and fun loving 9-year-old boy. He is the cartoon representation of BHEEM from MAHABHARATA. Blessed with a kind heart helps needy and the wronged with the help of his strength and even helps in nabbing the culprits. He portrays the image of guardian or savior of poor and innocent people and animals. He dreams of protecting the world. He has a soft corner for ladoos, which makes him even ore stronger (like spinach for Popeye). he has his gang of friends consist5ing of Raju, Jaggu and Chutki.

Chutki: This character is called as Pyari Chutki, a seven-year-old girl. She is the closest friend of Bheem, like we say buddies. She has always backed Bheem’s back in all of his adventures. If you are an regular viewer, you can easily infer from the series that she has a soft corner for Bheem and is over-possessive about him. She is noticed to get annoyed when Bheem gets into a conversation with other girls.

Raju: Popularly known as the mighty Raju is a four-year-old boy, is the son of the chief officer of the king’s army. He even aspires to become the chief officer one day like his dad. Although 4, he has already won the “Arjuna cup” for his archery skills. He is the protagonist or the main focus of the movie “mighty Raju”.

Jaggu: Mostly, in cartoons we see animals talking. when i was young, i was quite fond of the talking animals though. Yes, we do have such a character in this series. Its none other than our very own Jaggu, the talking monkey. He uses his tricks, along with his presence of mind and sense of humor to solve problems. he was the one who taught Bheem to swing and even is his ladoo stealing partner. Not to forget, it loves teasing Kalia with his followers Dholu and Bholu with his naughty tricks.

Ustaad Kalia: The Kalia Pehlewan or Bheem’s rival Kalia is a ten year old boy who loves bullying kids. He aspires to become rich as soon as possible and so has given into tricking people. He has his worshipers Dholu and Bholu to help him execute his evil plans. He claims to be the strongest, bravest and mighty amongst all but is nowhere to be seen when a crisis crops up. He is seen spying on Bheem to know his plans in order to defeat Bheem. But he is also seen helping Bheem when their Dholakpur city is in crisis and needs a savior.

Dholu and Bholu: The twin brothers and acolytes of Kalia,the bully. But they are not loyal to him, rather they have betrayed their boss Kalia for Bheem and Chutki when bribed. And so, at the end, when Kalia comes to know, he ruthlessly whacks them for letting out his deep dark secrets.

Kichak: Popularly known as pehelwan Kichak, is a wrestler from Pehelwanpur. He sees Bheem with green eyes as Bheem is more popular than him. But he enters the scene in the later half. Be it a bull race or cricket match, Bheem has always overthrown Kichak. Kichak’s gang includes Motu, Mannu, Chipru, and Birju.

Chota Mannu: He is also from Pehelwanpur. He is clever and has a strong physic. He is rival to the mighty Raju.

Rajkumari Indumati: She is the princess of Dholakpur city. She is believed to have a kind heart and is too caring.

Raja Indravarma: A valiant warrior of 35 years and a hockey player is none other than the king of Dholakpur city. He relies on Bheem for any crisis in his city.

Daku Mangal Singh: He is the cartoon representation of Gabbar Singh of Sholay. He is considered as the terror of Dholakpur city.

He had once kidnapped princess Indumati and again tried stealing the kingdom’s treasure.

Behan Shivani: She is Bheem’s foster sister from Pehelwanpur and owns “shivani da dhaba”. She has a prisoner father and needs 500 bucks to free him. In the meantime, Dabbu Pehelwan has took over the dhaba, but Bheem is there for his sister and helps her get back her dhaba and even frees her father.

This is a series loved by children rather enjoyed, not just in india but over the world. With TRP pouring in, ot just series but various movies too, have been successfully hitting the televisions of nearly all the homes with kiddos.

Various languages in which the show is broadcasted seconds its popularity, it is good to watch something in your own language. So, many people also want to watch in Urdu version and it is already available on many online channels