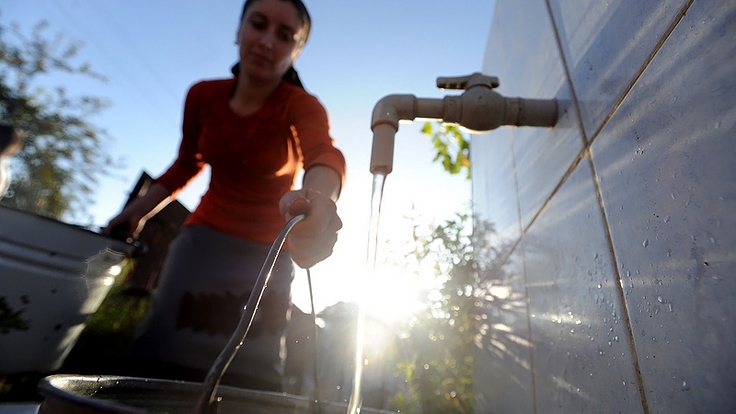 If blue is your favorite color, you will be glad to know that Neil Armstrong, the first human to set foot on the Moon, was struck by how blue Planet Earth appeared from that vantage point. This is mainly due to the two-to-one predominance of sea areas over land areas. There’s plenty of white stuff, too – for the time being at least – in the polar ice caps. Fresh water, however, is relatively inconspicuous from space: there are few freshwater lakes and even fewer rivers large enough to be readily spottable from space. No wonder: these surface waters account for less than 1 per cent of the liquid freshwater on our planet – nearly 99 per cent is hidden beneath the soil surface, as groundwater. We know of no other planets that contain water on the scale the Earth does. To judge from its geomorphology, Mars once experienced running waters, though at present any remaining water is essentially frozen below that planet’s surface in the form of permafrost.

The relative scarcity of water on other planets is due to the fact there can only ever be a narrow orbital corridor around any one star in which the temperature range is consistent with the existence of liquid water. The Earth happens to sit right in the middle of the Sun’s ‘circumstellar habitable zone’. The remaining planets in the Solar System are now too hot or cold to host liquid water. Nevertheless, ice whizzes around endlessly between the planets in the form of comets. When the Earth’s orbit passes through the wake of a comet meteor showers result, bombarding the Earth’s surface with fragments of rock held together by ice. At present, these so-called ‘dirty snowballs’ add a mere 40 tonnes or so of H2O to the Earth’s water inventory each year. However, it is believed that the rate of arrival of comet-derived water was far higher earlier in the evolution of our planet, and probably accounted for much of the water on Earth today. Where did the rest come from?

On primeval Earth, it must sometimes have seemed that, whenever you weren’t being bombarded with dirty snowballs, you were getting drenched with rain from volcanic ash clouds. To this day, more than two-thirds of the gases which emanate from active volcanoes are steam. At present, much volcanic steam is ultimately derived from local rainfall, recirculating in fiery futility within the volcanic edifice. Coastal and island volcanoes may also derive much of their steam from sea-water ingress. More exotically, water trapped in rocks that are plunged to great depths thanks to plate tectonic movements may also report to volcanoes millions of years later. However, a certain amount of volcanic steam will be absolutely new to the surface environment – so-called ‘juvenile water’.

Let’s stop talking about volcanoes and steam now, as thankfully we still have companies like Thames Water that are diligently working towards fulfilling our water needs and we don’t have to worry about deriving water from volcanic steam anytime sooner. In case, you have any concerns or queries regarding their services, please feel free to call them directly at Thames Water Contact Number.