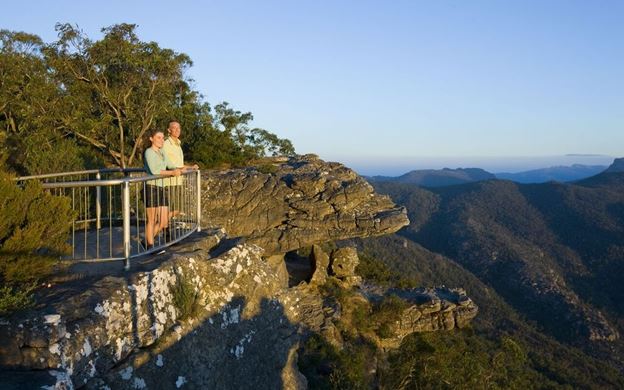 If you have ever dreamt of visiting Australia, then a good place to visit is Adelaide. From this city, you can tour one of the most beautiful national parks in the country. The Grampians National Park, also called the Grampians, is named for the sandstone hills that rise up in the Western Plain.

The Gariwerd or Grampians is a chain of rugged ranges that are home to woods rich in flora and fauna. The national park, which is one of Victoria’s most popular destinations, is the ideal site to plan a hike or bushwalk, rock climb or take a scenic drive.

A network of hiking trails throughout the park permits guests to explore magnificent wildflower displays in the spring and take in panoramic views from various lookouts. You can also see spectacular views of the Fish Falls in the area, which has a rich Aboriginal heritage.

It’s also nice to take a tour to the Grampians from Adelaide, as the contrast makes your trip to Australia all the more interesting. Adelaide has been described as a city that gives a person space to breathe. Therefore, a sense of freedom exists in the metropolis – one that is punctuated by an expression of movement and thought.

A Gateway to the Grampians

Not only is the city a gateway to the Grampians, but it is also a portal that leads to Australia’s wine country. The city centre itself is surrounded by parklands, cafes, historic buildings, broad streets, and lively cafes and restaurants.

Grampians National Park tours from Adelaide are consistently scheduled, making the city the ideal location for this type of tour to begin. Adelaide is bordered by beaches to its west and rolling hills to the east. You can also arrive in the city from the airport without difficulty. If you fly into the city, you are only seven kilometres from the metropolis.

Adelaide was founded in 1836 by a Colonel Light. At that time, he had one basic plan for the city. He had established a square mile city centre surrounded by a lot of open space. The streets of the city, which is now home to one million people, were positioned in a grid – a layout that was surrounded by what are now known as the State Heritage Listed Parklands.

Making the Transition from the City: Planning a Grampians Holiday

That is why it just makes sense to schedule tours from this city to the Grampians, and why this a holiday hub for tourists. Today, the city extends well past its square mile epicentre, flowing effortlessly into coastal escapes, such as the Yorke Peninsula, and national park systems such as the Grampians.

You simply cannot be spoilt for a choice of what to visit when you make Adelaide your base for a travel holiday. Whether you escape to the Outback or the Grampians, Adelaide is the ideal spot in which to make the transition.