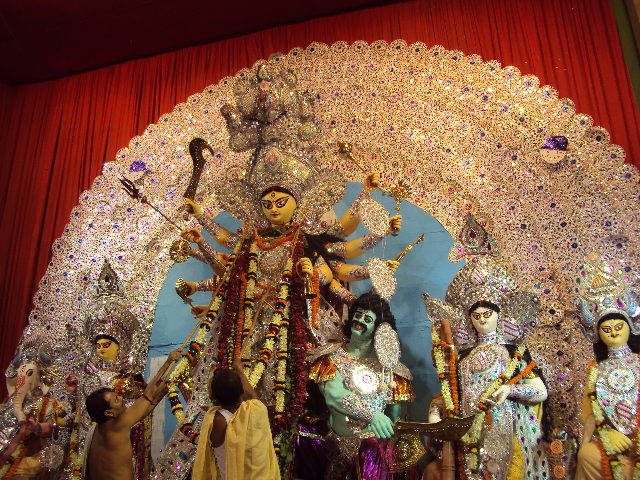 Kolkata still beholds its old essence with a pinch of modernity. Maach, Football, Politics and Durga Puja rightly define the city. Winter is the best time to enjoy and explore this old yet new city. Now, there are enough places to stay, be it a budget or 3 star hotels in Kolkata, the city has it all. You just need to plan your itinerary accordingly and choose which part to stay in. As North Kolkata still retains the old essence and Southern part is posh and offers a plenty of expensive option as well. With big malls and multiplex in the South and small lanes and old sweet shops in the North, the city has a unique charm which attracts people from across the world.

The most awaited festival of West Bengal is Durga Puja. Kolkata portrays a larger than life image during this time. The city gets ready like a queen. With numerous small and big pandals scattered throughout the city, Durga Puja is a must enjoyed festival at least for once. Though Durga Puja is widely celebrated in other parts of the country but it is undoubtedly typical to West Bengal.

When you are planning a tour during this time, there are some must not skip pandals in the city.

Here are the four most frequented Durga Puja Pandal of Kolkata. Here is the list where two pandals are from South Kolkata and other two from North Kolkata, respectively:

1) Suruchi Sangha: Let’s begin the journey from the Southern part. Located in New Alipore, Suruchi Sangha is one of the best-known clubs of Kolkata. With unique theme each year, especially displaying different states of India and a well-decorated grand pandal, Suruchi Sangha is an award winning puja pandal. Every year thousands and thousands of devotees and pandal hopper visit the pandal.

Nearest metro station is Rabindra Sarobar and Kalighat, from there you can take a taxi, auto or bus to New Alipore. From Rabindra Sarobar it is just 3 km, you can also take a walk during puja and enjoy the sight of the city.

2) Jodhpur Park: The splendour and the size makes Jodhpur Park Durga Utsav an enchanting one. With a wide variety of cultural theme, Jodhpur Park is a crowd puller.

The pandal is located is 12 km from Rabindra Sarobar metro station. Buses and taxis from Howrah Station and other parts of the city are easily available to reach Jodhpur Park.

3) Kumurtuli Park: Now let’s head towards Northern part. Kumurtuli is the artisan hub. Each year a large number of idols are made in this region which is then send to all parts of the world. The place is located near the Hooghly river. This old place of Kolkata organises one of the glamorous Durga Pujas of the city. Delicate craftsmanship with interesting pandal decoration, Sovabazar is the nearest metro station to reach Kumurtulli Park Pandal.

Central metro is the closest metro station that serves this region.

Pandal hopping and indulging street foods are the main motives of the Kolkatans during this time. So, be here and enjoy the world famous Durga Puja in Kolkata. Staying here is not a problem with increasing hotels in the city, the OYO rooms in Kolkata have also increased. You can easily check according to your budget.