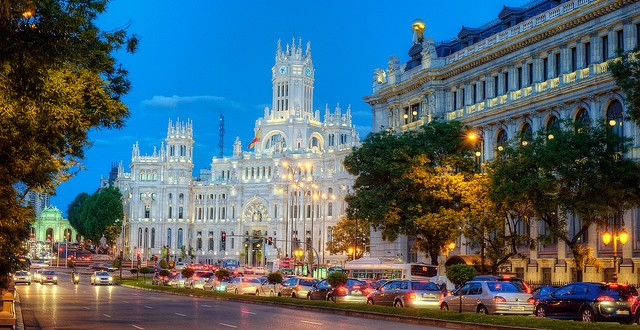 The pulsating city of Madrid is the capital of Spain and although not as popular as Paris among international travellers, it has more than a few interesting attractions. The city is located at the center of the Iberian peninsula, known for its jubilant festivals, impressive museums, succulent cuisine and exciting night life. There are many worthwhile attractions to visit when we go to Madrid. The Glorieta de Murillo is a perfect location for nature lovers, with many thousands of plants species. These plants were first collected by botanists Juan de Villaneuva and Gomez Ortega under the rule of King Charles III.

The grand main plaza of Madrid is known as the Plaza Mayor with its pinnacle towers, known as the Casa de la Panaderia. The Plaza has many visitors when the marketplace is open and during festival celebrations. To add a sense of fascination among people, the statue of Philippe III is added. The theater and music shows are available in some parts of the city, particularly the Moorish Quarter. The Parque del Buen Retiro park is another good destination in Madrid. It is essentially a park with a couple of building used often for art exhibitions. There’s an artificial lake nearby that allows us to do boating.

Visitors may also relish the dance performance and classical concerts of music in The Teatro Madrid, Auditoria Nacional de Music and Teatro Lirico Nacional del Zarzuela. Madrid is also popular for its amazing nightlife that can easily lift our spirits. Impressive nightclubs in the city are the Malasana and the Kapital, which is a 7-floor club. During the night, there’s also plenty of activity in Alonzo Martinez, the Paza de Chueca club and others. The clubs and discobars aren’t for couples and singles, but families as well. Festivals in Madrid has lured many people across the world.

Fiestas de San Isidro often bedazzles visitors with street concerts and dance performances. As a street festival, it commences from 15th May, also acts as a magnet for many people is delectable food during these festivals. Ferdia de Otono is in September and Feria de la Comunidad is in May. The Verbena de la Paloma is another spectacular festival and it occurs from 6th to 15th of August. These festivals really offer us a glimpse of local cultures with people decked up in their treasured traditional attire. The live performance of bands could thrill us and the ravishing decorations add plenty of excitement.

The Circulo de Bellas Artes is an exotic New Year celebration in the city and known for its masked performances. Apart from the adventure and fun, Madrid also specializes in great cuisine. Other than special Spanish cuisine, there are also German, French, Chinese, Italian and Swedish restaurants. The city is really a home for budget travellers who love to eat. Many restaurants have special accommodation that’s designed to cater well to the demand of many travellers. If we are planning to visit more crowded restaurants, we should get the reservations done in advance.