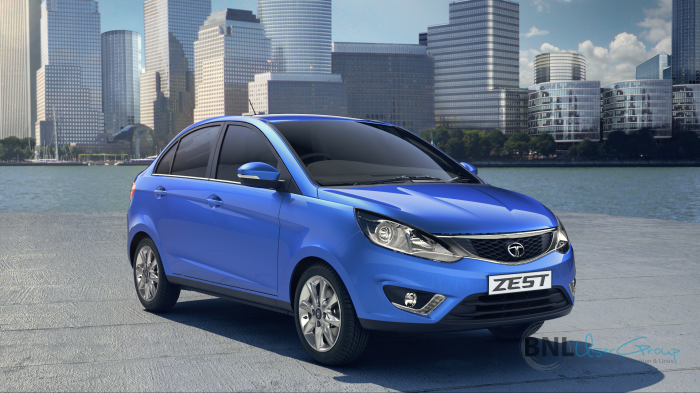 Tata Motors had not been doing very well in the Indian auto industry, especially in the passenger segment, for quite some time now. That the automotive sector was going through a decline also worked against the Indian conglomerate in this segment. In addition, the Tata cars were generally diesel powered and there was a dip in demand for diesel engines in between, which also contributed to the poor show by the company.

However, Tata Motors decided to overcome all the setbacks and lined up new releases to strengthen their position in the market. They looked to regain the lost space and to conquer some. With that intent, the company introduced the latest car – a sub-compact sedan named Zest, in the Indian car market.

At the exterior, Zest is entirely different from what a Tata car used to be until now. The Zest has shrugged off the traditional look and has gone for more contemporary look and feel.  The design language is more attractive and pleasing than ever before.

Under the hood, the Zest carries a brand-new, indigenously developed four-cylinder 1193 cc, 1.2 Revotron turbocharged engine that generates 89 bhp of power. This engine is mated to a five-speed manual gearbox. Zest is available in both petrol and diesel variants – there are nine trims of Zest, five in diesel and four in petrol, to choose from. An automatic version, a diesel variant, is also included in the lot. The new car is quite fuel-efficient too – it returns a mileage of 23 kmpl, which is rather impressive.

Tata Zest Price tag of INR 550000/- and upwards. Though it is not the cheapest of the lot, the pricing is quite competitive.

On the exterior, the Zest is refreshing to look at. It can take on the rivals in this department easily. Zest bears a lot of similarity to its upcoming sibling, the hatchback Bolt, which will be launched shortly. Overall, the Zest offers a more balanced feel, despite the rear being trimmed. Zest comes with alloy wheels, body coloured bumpers and chrome inserts on the exterior as standard on all models.

The Tata Zest is giving a tough fight to the rival sub-four meter sedans like the Maruti Suzuki Swift Dzire, Honda Amaze, and the Hyundai Xcent.

For information on Bikes in India log on to – http://bikeportal.in/