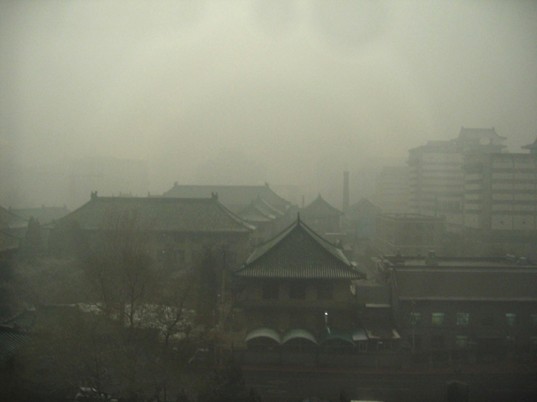 Apparently, the air in China is very bad, and especially in Beijing. Recently, there was a story about how the visibility was so bad that a factory in Beijing had burned to the ground, and had been burning for several hours, before anyone noticed that there was a fire. This was because there was so much smoke in the air that the smoke from the factory was able to camouflage itself quite easily within the rest of the smoke and the smog. The 2008 Olympic Games, which were held in Beijing, was when the rest of the world found out about the bad air in China. Athletes were unable to go there to train for the games because the air was so bad. As a result, China stopped coal plants from producing pollution by shutting them down and reduced traffic. All of their efforts worked for the duration of the games.

Since 2008, things in Beijing have gotten worse. Airline flights have to canceled quite often if the planes cannot take off because of the pollution. Also, concerts often do not happen in Beijing because singers are afraid of singing in the pollution and get asthma. The drivers cannot see the road when they are traveling down it, and even schools close down so that children do not have to leave their homes and go out into the smog. The air in Beijing is forty times higher than the limit on particulates that the World Health Organization set standards for. In fact, pollution is so high in Beijing that experts can’t even be sure of how high they are, because they can’t be monitored. The pollution is blamed for more than a million premature deaths in China annually.

This means bad things for China, unfortunately. The pollution is caused a marked increase in tourism. In fact, the tourism industry has been cut in half just in the last year, and this creates financial problems for those industries that depend upon it. Also, headhunters are unable to attract the employees that they once did. It was once very easy for Beijing to attract some of the best talent, because of the high tech industry and the wealth that is there, but prospective employees are now weighing the benefit of having a good job against the risk of serious health issues by living in Beijing.