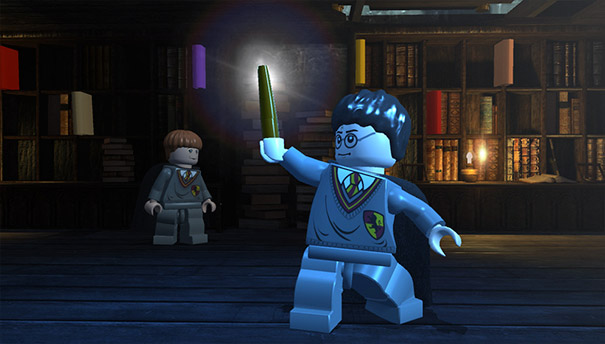 “Lego Harry Potter: Years 1-4”, as the title implies, uses material from the first four Harry Potter novels. It follows the movies more closely than the books, including the use of John William’s enchanting score for music. In this charming and funny game, the characters use expressions and physical exaggerations to communicate rather than dialog. To catch all the references and inside humor, it helps if you are familiar with the story and characters already, but even if you are a novice in the Harry Potter universe, you will find yourself enthralled with the action.

Like other Lego games based on movie franchises, you smash Lego constructions to find currency, locate pieces to construct useful objects, and discover clues to solve puzzles. Though you battle enemies such as dementors, Aragog the acromantula, and Voldemort, the Harry Potter game relies less on combat and more on casting spells. The magic helps you surmount obstacles, defeat adversaries, outwit rivals, and find routes to help you get to new levels.

One of the great thrills of playing this game is exploring the environment of the Harry Potter universe. Locations like Hogwarts, Gringotts Bank, and the Leaky Cauldron are presented in marvelous complexity. To uncover all of the game’s secrets, you have to return again and again to these areas as different characters. If you get lost, Nearly Headless Nick guides you to the next mission. If you need new characters, spells, costumes, and other trinkets, you can descend to Diagon Alley to spend your currency. Exploring the nooks and crannies of the iconic environments is one of the most appealing aspects of this game.

There are over 160 characters to unlock and use in game play. In early Lego video games, two-player action was difficult, because when players separated, they would tug at each other to stay on the screen. In this game, a clever split-screen effect is used, so that when players get too far apart, the screen separates and shows the action of both players simultaneously. When you finish the game, the level creator allows you to construct your own scenarios. Some players have been disappointed, however, that after spending hours creating an original level, they are unable to save it and send it to their friends.

A few noticeable glitches affect game play. Spell targeting is not always precisely accurate. The multitude of spells makes it difficult to cycle through to the one you need in the middle of a tense situation. In some places, there are odd camera angles and blurred edges. A few bugs in the programming necessitate occasional restarts. Some fans decry the lack of a three-player co-op — as there are three main players in the story — and the lack of an online co-op game. These deficiencies are insignificant, however, when compared with the charm, good humor, and complexity of the game as it is.

There is so much to explore, find, and do in the “Lego Harry Potter: Years 1-4” game that it is impossible to complete it on the first try; you need to play it over and over to find and accomplish everything. It is a game that offers many hours of delightful fun for players of all ages.