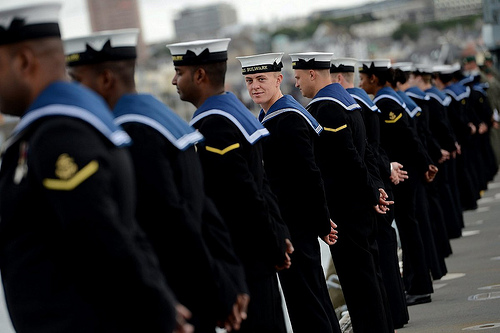 In spite of Britain’s recent economic woes, there’s still one employer that aims to take on around 24,000 new recruits each year. I’m talking about the British Armed Forces, which consists of the Naval Service, British Army and Royal Air Force.

A career with the Forces doesn’t necessarily mean frontline service. There is a wealth of career opportunities in each service, including jobs you might not expect such as chef and dental nurse.

No matter what role you choose, if you sign up with the military you can expect a lot of benefits that aren’t so easy to come by in “civvie street”. Below are four examples of perks the military can offer that civilian careers may not.

Many civilian careers these days require you to have had a higher education. Even those that don’t may be forced to choose based on those criteria in today’s competitive job market.

You don’t require a further education to be able to join the Armed Forces, but you are able to pursue one alongside it. There are opportunities to gain official qualifications such as GCSEs, A-Levels and even Degrees. What’s more, you may be able to do so for free.

There are also opportunities to learn specific skills for a trade that will last beyond the military. All three services offer civilian-recognised apprenticeships and qualifications. Better still, if you wanted to carry out training in something not directly related to your career with the forces, there are schemes within that offer generous funding towards making that happen.

When you’re working a nine-to-five office job, it’s sometimes hard to find the time and/or motivation to keep yourself in good shape. In the military, it’s part of the lifestyle.

In addition to improving health and fitness, sport teaches discipline, teamwork and mental strength; all things that will help tune candidates into the military mind-set. For this reason, sport is not merely offered as part of life in the forces, but actively encouraged.

It’s not only the obvious ones, either. Along with popular sports such as football, rugby and athletics, there is a chance to participate in a variety of sports ranging from golf to surfing to archery.

Facilities and training are of the highest standard too, so if you’re talented and driven enough to compete at the top level, there’s every chance the military will help you realise that potential. Before becoming a double Olympic gold medallist, Dame Kelly Holmes famously had a nine year career in the Army.

The world is more accessible now than it has ever been and many people, regardless of the career path they choose, take the opportunity to travel and explore the world.

For many military careers travel is a necessity, meaning that not only do you get to go places for free, you actually get paid for doing it. Not just to areas where there is unrest either; one friend of mine who works for the Royal Navy visited twelve countries in a seven month deployment to sea, including Malaysia, the Maldives and Tanzania, where he and his colleagues had time to go on safari. Another, based with the Army, did a six week training stint in a camp in Nevada, USA, with weekends free to explore nearby California.

When asking people who had experienced military life what the benefits were, I got a mixed response. The points above came up a lot as well as a few other things depending on each person’s experiences. But there was one thing they all agreed came guaranteed with a military career:  great mates.

From basic training through to deployment and beyond, the adventure of life in the Forces becomes the common bond that keeps those working within it close. Whether it’s the living in close quarters, seeing new places together, or the hazy memories of what happened at the social events, one thing’s for sure: Join the military and you can count on making friends for life.

It’s not for everybody, but the military offers quite a life along with a diverse range of jobs to choose from. So if you’re wondering what’s next for you, why not check out what’s on offer? It might be just what you’re looking for.

Can you think of any other benefits of a life in the military, or have you got any first-hand, personal examples you can share? Let us know in the comments.

Liam Crouse is a Cornishman who lives and works in Bristol. He enjoys reading and writing about the military and recommends JBI Online to anyone considering or already working in the Armed Forces for additional insurance cover.