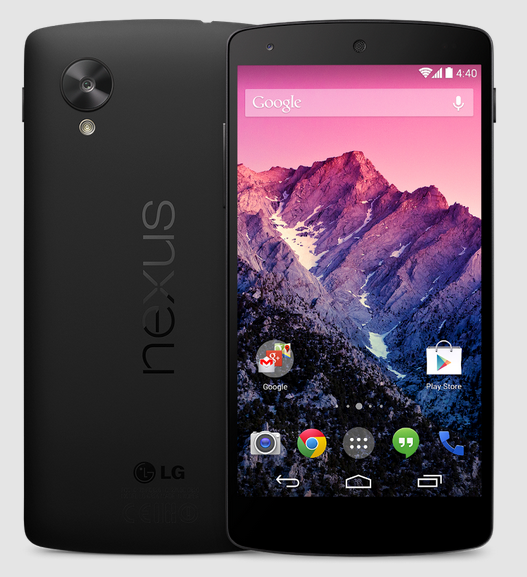 The much awaiting Nexus 5 is out on Google Play Store for sale at a cost of US 349 dollars for 16GB and US 399 dollars for 32GB and is available in both white color and the black colors. And the surprise is here. This new Nexus 5 runs on the Android’s 4.4 Kit-Kat operating system which is also the much awaiting operating system to be launched by Google. This operating system, Android’s 4.4 Kit-Kat can also be upgraded on Nexus 4, 7, 10 and Galaxy S4, even HTC One Google Play Edition devices and that to only in the coming weeks. Presently this Android’s 4.4 Kit-Kat operating system is available for the Nexus 5 device only. The interesting fact is that Nexus 5 is designed by the LG manufacturers and has a soft touch backing same like that of the Nexus 7. The size of the device is said to be 8.59mm thin and weighs only one hundred and thirty grams. It is designed more thinner and lighter than that of its predecessor the Nexus 4.

There are many smart features for this device. This device is made of Qualcomm Sanpdragon 800 quad-core processor. This device even owns a graphic processor which was designed by Adreon 330. The Random Access Memory of this device is a 2GB RAM with 5 inch display and the pixel resolution of 1080p. The Glass is made of Gorilla Glass 3 which is tough and strong. This device is same as that of the Apple devices because in this device also we cannot remove the battery. This device contains a non removable 2300mAh battery, 4G LTE support. The rear camera is a eight megapixel camera with Optical Image Stabilization. The front camera is of-course a 1.3 megapixel camera. As it is the much awaited operating system launched by the Google, many of the users are tending to use this device. So, for those who are not aware of this operating system the default launcher is available called as the Google Experience, and allows the first time users or the new users to begin by just saying “OK, Google.”

Unlike all the devices this devices is both transparent for navigation and status bar allowing all the applications and wallpaper occupy whole screen. Some other applications such as the books and movies are automatically displayed in the full screen. Strictly speaking, the Random Access Memory of this device is greatly improved from that of the other devices as per Google because, it allows faster multitasking and the ability to work the Android’s 4.4 Kit-Kat operating system on other low end devices with 512MB and 1GB of Random Access Memory. The phone application have been updated a lot to provide better and perfect caller ID and prioritize contacts.