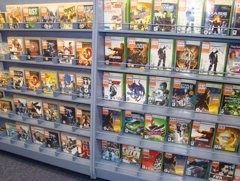 Next time you go to throw an old computer game away or stuff it in the back of a cupboard, stop for a minute and think. That game sitting in a cupboard or at worst – ending up in landfill – is not going to do anybody any good.

Cash for you and your family

Potentially, you could sell that game and make yourself some money, which you could then use for something else. Perhaps even buying the latest game title or putting some cash aside for a new console.

By far the best way to sell your computer games is to use the internet. A quick search will find you companies who are willing to give you cold, hard cash for your old games and consoles. Using the web, you can quickly compare how much each company will pay and sell it to the one that is offering the best price.

Online, it is possible to sell your old computer games on auction sites and classified advertising websites. All you need is enough time and patience to take photos of the game and list it on your chosen sites.

You need to bear in mind that some of the games that you list will not sell. In which case the listing fee will have been lost and you will be left out of pocket. Another mistake people make is not to factor in the cost of postage and to sell their game for too little cash. In some cases, they end up paying out more in postage than they are actually paid by the buyer.

As well as giving you the opportunity to make some extra cash from your old games, it will also be giving others the opportunity to enjoy that game. Some people are on extremely tight budgets so only get the chance to buy and enjoy certain videogames when others sell on their copy.

Good for the planet

Another reason it makes sense to sell your old video games rather than putting them in the bin is that it is good for the environment. Old electronics and games take up a lot of space in landfill, and because the materials they are made from are not biodegradable, they take a long time to degrade. When they do they could release toxins into the environment, so selling your old PC games really can help the planet.

So, next time you go to put an old PC game in the bin, stop and think about selling it, recycling it, or giving it away. Doing so will help you, others and the planet.