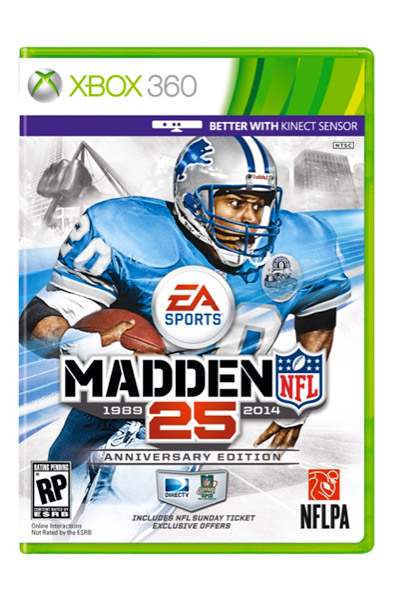 Madden NFL 25 is going to release within a few days that would surely an exciting announcement for football fans. According to reliable source, numerous gamers and fans of Madden purchase the game on a yearly basis despite knowing the changes and features of newly introduced game. It is worthy that most of the fans are eager to view some positive reviews before the release of the game.

Critics are really excited to receive the new Madden game, which is reported to celebrate the 25th anniversary this year. They are hope to get something better than that of the facts released in the review when PlayStation 4 and Xbox One versions of the game are released in November.

Several reviewers publish their opinions about the games in respective websites to quench the thirst of the fan base of the game. Patrick Allen of Fansided is one among them. He reviewed several aspects of the game individually. He is really excited about the new version of the game. He graded the game as A+.

Allen further opined that the exclusive feature of the game, Madden Share has been used in several 2K games. For this reason, EA Sports decided to explore the game as well. This feature would allow the player to share their sliders, playbooks, roasters with others.

Moreover, he graded Infinity Engine A+ and Precision Modifier A-. He is of the opinion that the updated physics engine would create a massive change over Madden 13. However, Allen gave Madden A- grade and suggested the fans to try it.

It is worth to note that IGN is one of the most consistent sources that offer their exclusive reviews for the fans of Maddens every year. Jack DeVries reviewed the game this year. The developers clear out the minor issues regarding the length of the game introduced last year. According to Jack, the character models of the game are better than ever before.

Another improvement in the game play is regarded as the Precision Modifier in the running game. Jack also informed that players would experience more excitement in the running of the ball. Some exclusive and special moves including spins, jukes and hurdles are added to the feature of some star character models like Adrian Peterson.

Jack was impressed by the several facilities offered by the Owner Mode that is informed to take full control of a franchise including concessions, relocation of teams and setting prices. Overall he graded Madden 25 8.5 out of 10.

Mike Suszek offers a review resemble to that of the review of Jack to a large extent. In addition to that Mike likes the collision detection features of the game as the players of the game, he opined, is far sturdier in the latest version. He informed that in this version, Madden 25 lay more stressed in utilizing the tools that added extra dimension to the game.

Mike opined that the game introduced a better read option with EA Tiburon. To import NCAA 14 draft classes into Connected Franchise is perhaps a huge selling point of the game. However, Mike granted the new version of Madden 25 four stars out of five.