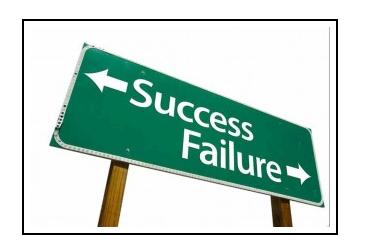 There’s a saying in business that, if you’re going to fail, do it fast! Basically this means that it’s important to know when you’re flogging a dead horse, and not to cling onto a business idea out of vanity, arrogance or embarrassment.

There’s no shame in having a business fail. In fact, many of the best know business men and women in history have overcome setbacks before eventually reaching business success, including:

The motor empire founder has a name that’s recognisable worldwide, but Ford wasn’t his first automobile business venture. He had in fact tried and failed to set up several automobile companies, before having success with the ‘Model T’ Ford car. The rest, as they say, is history in a hatchback!

When Anita Roddick opened her very first Body Shop store in Brighton the name was objected to by two local funeral parlours! Roddick used this to her advantage however, by interesting the press in the story, which got the word out about her business and attracted customers to the store. The Body Shop is now a globally recognised brand, with a store on every high street.

Business wasn’t always a fairy tale for Walt. In the early 1930’s he was licking his wounds after losing the rights to the popular Oswald the Lucky Rabbit character and seeing his company plunge $4million into debt. Still, all it took was a raven haired beauty and seven charming dwarves to turn the fortunes of the Disney empire around, and the company is now one of the biggest business super-powers in the world.

Jobs was forced to resign from his first spell as an Apple employee, and then spent years developing the doomed NeXT computer workstation project. After welcoming him back into the fold, Jobs rewarded Apple by developing the iPod and the iPad, which have both revolutionised the way a generation use technology.

Donald Trump may well hold the record for the most business failures – counting Trump Airlines, Trump Vodka, Trump Casinos and Trump Mortgages amongst them. However, his net worth was estimated this year to be $3.2billion, which really does give weight to the phrase ‘if at first you don’t succeed…’

While these examples show that having a business fail by is by no means an indicator that you can’t go on to be hugely successful, in either that, or a different business, it’s still wise to give yourself the very best chance by doing all that you can to ensure that your business is viable before investing time and money into it.

Strive for the best but prepare for the worst by ensuring that you have the right insurances in place. You can find public liability insurance quotes quickly and easily online – make sure that you are covered so that, in case of disaster, you’re able to pick yourself up and move on as quickly as possible.

This article has been written on behalf of Hiscox, a trusted business insurance provider. Winner of Best Small Business Insurer at the Start Your Business Awards 2012 they offer public liability and professional indemnity insurance for the ultimate professional peace of mind. Ensure that you’re protected with the right policy, just in case the worst should happen.