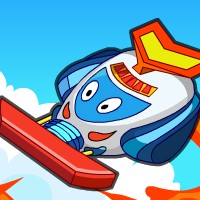 Many parents are of the opinion that their children become lazy and waste time playing games. However, this is not true. Today there is an array of games that help your child learn new things and develop their intellect. There are action packed games, fantasy games and arcade games. There are millions of sites online that offer these games for free. Of the many benefits that online games have to offer some of them have been mentioned below:

Almost in all adventure games, kids are required to defeat the opponent and move on to the next level. To defeat their opponent they need to look for different ways in which they can surpass their enemies. As the levels keep increasing, the complexity of the game increases and the child has to think really hard to surpass his opponents. This activity enhances their analytical skills and their problem solving ability. Puzzle games also help them increasing their ability as they have to put together small pieces of puzzles one by one to get the complete picture. Puzzle games also increase their observation skills as only if the child keenly observes he would know which piece goes where.

Creativity: Recently flash games have been launched which are seemingly very real and keep kids captivated. These games are created with an intention to enhance the imagination of the child and also increase their creative skills. For example dress up games, cooking games etc. The child has to customize their characters based on the concepts given. The child is then allotted points based on how uniquely and interestingly he or she has dressed their characters.

Reflexes: Action games and driving games are very fast paced in which the child has to act very quickly. The next move is unpredictable and the child needs to be ready and alert throughout the game. This obviously tends to improve their reflexes. Arcade games such as shooting games also help kids to be alert.

Social Skills: Many games site are now offering free char rooms for players playing that particular game. Thus, they can make friends and chat online with them while playing the games. Also some games require partners and hence kids who are otherwise very introvert, open up while playing these games. Thus, these games also help kids socialize and get friendly with their peers. It also helps in their over all personality development.

Learning Facts: There are many games that are based on subjects. There are games based on alphabets, phonetics, numbers, hindi letters, science, maths, additions, subtractions etc. Accordingly to your childs age and his subject requirement, you can download relevant games and introduced the concepts to him and teach him. It has been observed that when you teach kids via games they find them very exciting and show more interest. This is also one of the reasons why many schools are now adapting to audio visual teaching methods.

Thus, free online games are very helpful in teaching them new things, developing their personality and also making them understand their educational concepts in a better manner. However, parents have to be careful that they spend only limited time on these games as these games require kids to sit in one place for a very long time which is not very healthy for them. Physical activity is a must for an child and parents should ensure that they play outdoors as well. Getting addicted to these games is not good and you should not encourage it. Playing Throne is one such website that has various games for kids.

Author is a software engineer who designs different games for kids. Playing online games is his passion as well and he has turned his passion into his profession.