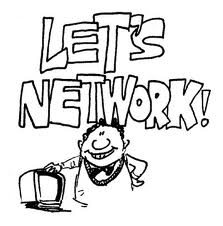 If you’ve never attended a networking event before the very thought of it can make you want to curl up in to a ball, but it isn’t all bad. Attending networking events can open up a world of opportunities for you, both personally and for business gains. After Business Networking in Manchester on various occasions I have found that the key to attending a networking event is to be prepared. To ensure you make the most of every networking event follow my 5 step preparation guide:

Networking events are all different, they tend to be aimed at specific industries or audiences, so before you attend make sure you research who you will be networking with. Social networking sites are particularly good for this, often detailing who will be attending and who isn’t, you can even go on to further research your fellow networkers on the likes of Linkedin. Having a detailed background of their work and their industry will give you some good talking points. It will also ensure you can target who you want to network with; there’s no point in wasting your time talking to somebody who isn’t going to provide any opportunities. If you’re speaking at a networking event knowing your audience will allow you to plan your talk.

You never get a second chance to make a first impression, so the saying goes, so make sure you dress to impress when attending a networking event. Look in to your venue, your audience and take in to consideration your comfort factor. You want to look good, not awkward and uncomfortable. Your attire must be professional, people are likely to judge you and your business on what you are wearing, unfair but that’s life.

‘Fail to prepare, prepare to fail’, this couldn’t be truer for the big bad business world of networking. If you don’t come prepared you’re not going to be taken seriously and this could seriously damage your own and your company’s reputation. You will often be asked for business cards, so stock up, if you think you’re likely to be asked for literature then take as much as you can carry, or get with the times and take a tablet to show off your literature and email it to them there and then. If you’re talking at an event, practice, practice, practice, there’s nothing worse than watching someone ‘bomb’ on stage, confidence is king, so even if you’re terrified take a big breath, smile and give it your all.

All networking events can differ, some lasting all day, whilst others will be organised for set times. Either way it looks better for you and your business if you arrive on time. If it is an all-day event, arriving early will mean you’re catching people at their best, rather than late in the afternoon when everybody wants to go home. If you’re talking at an event make sure you arrive with plenty of time to set up your equipment, and to check that’s it’s working, you don’t want to look incompetent in front of business prospects.

Whether your speaking at a networking event or just working the room, be memorable, people will remember you if you’re enthusiastic. Ask them questions about their business, plans and aspirations and pay attention when they speak. Introduce people where you can and introduce yourself wherever possible. If you’ve prepared a speech, test it out on friends and family before you present it to the masses, a little constructive criticism never hurt anyone.

Stick to these simple steps and you’ll be ready for any networking event.

Leah Jarratt is a regular guest writer for Events Manchester, bringing you the latest business, cultural and sporting events.