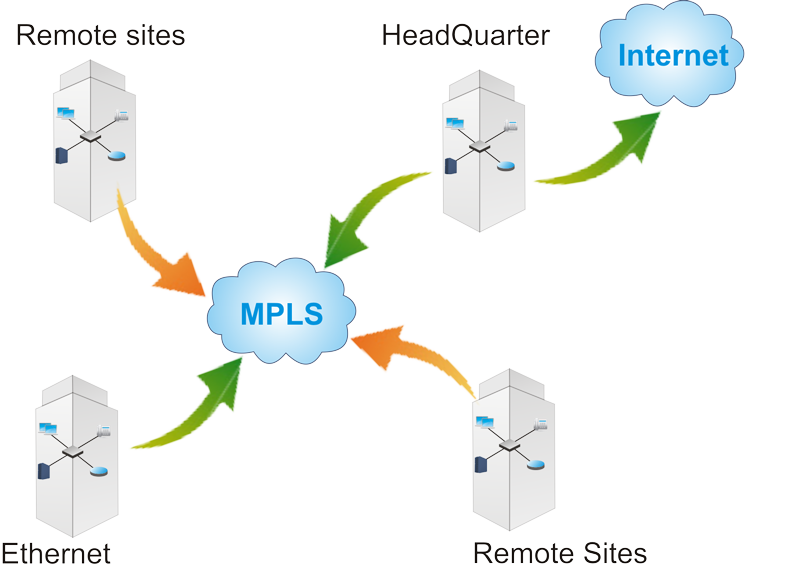 MPLS or multiprotocol label switching is often termed as the smarter way of data transmission. MPLS works by assigning labels to data packets and as these packets are passed through an MPLS network, the router uses what is known as the shortest path rather than the conventional long path routing. Prioritization is key when it comes to using MPLS networks and therefore, organizations can enjoy a vast range of benefits.

Before delving into the benefits of MPLS, it would be worthwhile to take a brief look at the differences between this protocol and the conventional IP network.

Organizations will also be benefited from deploying the MPLS data transmission system because of the specific benefits that can accrue to them. Some of these benefits are:

The strength of the network is only as good as the amount of time for which is available. But with the help of an MPLS network system, there is very little manual work that the network service provider has to do. This means reduction of human intervention and therefore human error. More automation means that data can be sent on an alternative route if one is not available.

Though this is a rather broad ranging term, with MPLS networks, performance can be measured in various ways including

Basically, MPLS is an intelligent way of data transmission. It will also be able to take care of prioritization of different types of data by which, important data such as voice over Internet protocol is given a higher priority than others. Network congestion is also reduced because MPLS works on the principle of identifying the shortest way of transmitting data. Therefore, prioritization and using the shortest route come together to deliver better performance.

MPLS also enables integration of different types of technologies into one Internet protocol network. This leads to simpler management of the network and better control of important aspects such as uptime, reliability, performance and even efficiency of the network. This can become important for large enterprises who need to have robust network infrastructure in place in order to conduct their daily business.

One of the most important terms when it comes to network performance and management is something known as QoS or quality of service. With the help of the MPLS network, this QoS can be maintained at some pretty satisfactory levels and is delivered by service providers to end-users. This component of MPLS also becomes important for business organizations that are dealing with a lot of video and voice data.

DR or disaster recovery is also another key deliverable with the help of an MPLS network.

James is a writer and blogger with 5 years experience.