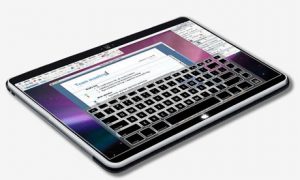 Nothing is quite as geeky cool as a two-in-one tablet that doubles as a PC monitor. In April, you will have the option to purchase the Asus Transformer AiO, an amazing 18-inch two-in-one with exceptional features. As you wait for it to debut, here’s what you need to know about the AiO

Before looking at the great features of the tablet, consider its specs. The Asus Transformer AiO has an 18-4-inch, 1080p screen, which is quite large as far as tablets and laptops are concerned. The LED backlight and full HD provide a crisp, bright image on the display. It has 10-point multi-touch capabilities on the screen when used as a tablet. When used as a tablet, it operates Android 4.1.

The Asus Transformer AiO, when used in PC mode, uses Windows 8 and has a 2 TB hard drive. The third-generation Intel Core i7 processor is nothing to sneeze at either. The multi-touch capability continues to work when it is in PC mode as well.

Now that you understand the important specs of the device, which are pretty impressive, take the time to look at the functionality of its various features. For example, the Asus Transformer AiO comes with a PC Station that allows it to be used as a traditional PC, with mouse and keyboard included.

The device switches seamlessly from Windows 8 to Android 4.1. All you need to do to make the switch is connect or disconnect the tablet, and it will do the rest. If you are close enough to connect to the PC Station through your Wi-Fi connection, you can set the device to tablet mode to continue running Windows 8 remotely if you wish.

When disconnected, the Asus Transformer AiO functions as one of the biggest tablets out there. It is much heavier than an iPad, so it may not be your go-to tablet of choice, but it is still a cool feature. When you are using it in detached mode, someone else can use the PC Station as a computer with their own Asus Transformer AiO, so in a mutely-computer household you may not need to have more than one station. You can even hook up the device to its own separate monitor and use it like a CPU. You can use any PC monitor or HDTV as a monitor for the device.

Sound is great on the new tablet, as it has ASUS SonicMaster audio technology built in. The IPS technology in the display means you have a wide viewing angle, 178 degrees to be exact, on the device whether it is attached or detached.

There is something very out-of-this-world about a tablet that doubles as a true PC. This is a true all-in-one PC, and perhaps the foundation for the next generation of computing. Get your hands on one when they release on April 12, and be the talk of the town when you grab your computer monitor and take it on the go with you.