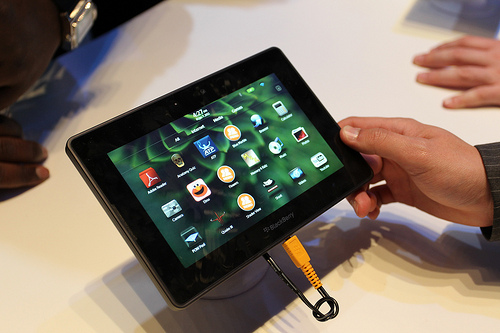 Mobile gaming is bigger than ever, with a huge variety of games available, catering to all tastes. BlackBerry PlayBook reviews have highlighted the device’s potential as a gaming platform, and with the recent update to the PlayBook OS, both the number of games available to play and game performance has increased. Whether you want something casual to play on the bus or a deep, rich RPG with a great story, the App World has some great games available. Here is a handy list of some of the best offerings to get you started gaming on a PlayBook.

Pixelated is a colour-matching game, in which the player must convert the entire screen to one colour in a set number of moves, by matching various adjacent tiles. The gameplay is very basic, but that doesn’t stop it being extremely addictive. And with millions of downloads, as well as (to date) over 4000 reviews on the App World, it’s rapidly cementing its place as one of the best puzzle games in the App World.

Here’s a unique concept for a game, if ever there was one: a fast-food management sim. While it may not sound like the most exciting game in the world, there is a surprising amount of gameplay here to keep you hooked. Building on principles established by great management sims of the past like Theme Park, Papa’s Burgeria places you in charge of a burger joint. You have to keep your customers happy by taking orders and making sure the burgers don’t burn, as well as a whole host of other jobs which will keep you on your toes, as you decide how best to divide your resources. 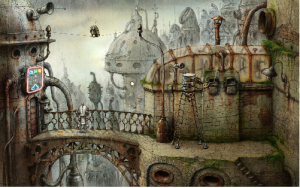 If the frantic time management of Papa’s Burgeria isn’t your thing, Amanita Design’s adventure game Machinarium is a much more slow-paced, cerebral affair. Featuring a silent (yet hugely likeable) robot protagonist, the game takes place in a beautifully designed world of machines. Along your journey, you will encounter a cast of colourful characters, as well as some very fiendish puzzles. The story is vague, and is told almost exclusively through thought bubbles that appear over the characters’ heads, yet somehow still manages to be engaging. It’s a game you experience as much as you play, so it’s great for unwinding at the end of the day and losing yourself in a rich, vibrant world.

Some of the best games on the PlayBook are ported from a different OS, but there are also a number of PlayBook-exclusive titles that are hugely entertaining. Flycraft is one such exclusive, and it’s a cracking little physics game in which you must construct a flying machine. There are a huge number of parts to choose from, and how you put them together is up to you. The further you fly, the higher your score. It involves quite a bit of trial and error, but the crashes are often spectacular, and there’s a competitive element as you attempt to beat your friends’ high scores, so the game never gets boring.

One of the most graphically impressive games on the PlayBook today, Dead Space is a mobile version of the popular console action/horror game. It retains much of the atmosphere and menace of the original, and the two-thumb control system works well on the PlayBook’s touchscreen. It runs very smoothly as well, despite being very graphically intensive. This is thanks in part to the recent update which made the OS environment more stable for demanding apps, as The Verge’s BlackBerry PlayBook review points out. Be warned, though: this game is not for the faint-hearted, and definitely not for children.