All of the controls for lights and equipment that your home automation system uses are controlled by the system via commands from the mains. An X10 signal is used to transmit a signal throughout the system and execute the necessary commands after you change the controls. Of course, all the switch points throughout the house uses a receiver in order to receive the commands and execute them.

The receivers in these switch points are known as modules. As you know from operating the system, the commands to manipulate your switch points can be controlled independently. This is because each module gets an address so that it may be controlled on its own. The switchboard of the Marmitek alarm system or a TM13 transceiver can be used for a central receiver. 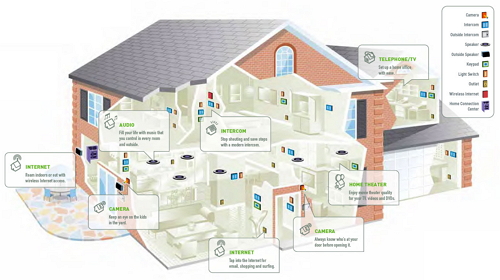 Modules are responsible for controlling equipment and lights. Four different types of module are used in home automation. These types are modules used in DIN rail assembly, plug-in modules, and built-in switches. Each module receives the commands from the controllers through the mains.

Using the mains, the controllers send out an address and a command that allows the user to control the modules. For optimal home automation security and customization, controls throughout the system can work as alarm systems, telephone responders, timers, universal transmitters, and PC interface.

Two code dials can be used to set up to 256 different addresses. These two code dials are further divided into two categories, UnitCodes (1-16) and HouseCodes (A-P). Because controllers and modules form part of the same system, HouseCodes can also be set on a controller. The X-10 system makes use of standard commands to control all units with the same HouseCode at the same time (e.g. All lights on, All off, etc.).

In short, X10 proves to be an easy-to-configure tool in home automation. It is comprehensive, and when used can help protect your home and make it even safer by allowing you to control lighting and other modules throughout your home with the push of a button.