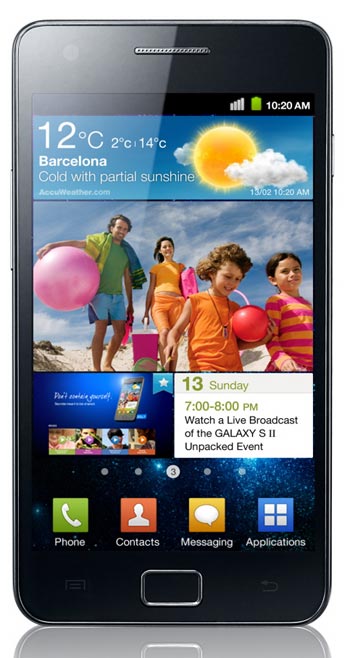 The Samsung Galaxy S was the best smartphone the company has released. So it was no surprise that the Koreans would dub its successor Galaxy S II. The new smartphone has 1.2GHz processor, ultra-slim chassis and super-light insides, which should bring the Galaxy S II up front in the dual-core race with iPhone 4S, LG Optimus 2X, HTC Sensation and Motorola Atrix.

The Samsung Galaxy S II is incredibly thin – with dimensions of 125.3 x 66.1 x 8.5mm it’s one of the slimmest smartphones out there, even thinner than the iPhone. It’s extremely light too – all the technology in it is packed in one device that weighs exactly 116g. Samsung decided to replace the all-metal frame that significantly contributed to the gram count of the previous Galaxy S and replace it with thin plastic. But the clever design makes it all fit in nicely when put together. At the rear, the battery cover has mashed surface so your hand doesn’t feel warm during long conversations.

The first thing you notice when you pick up Galaxy S though, is the display. It’s hard to miss the 4.3 inches big Super AMOLED plus screen as it feels like wide screen TV in your palm when you turn it on. The Galaxy S was revered as the best phone on the market for media, and Galaxy S II has not just live up to the reputation, but it improved it.
Despite the slightly frightening size of the phone, Galaxy S II actually fits very nicely in the hand, mainly due to its thin depth. The design of the front of the phone is really elementary where the home key is the only real button. The volume keys are set on the left-hand side and the lock/power key is on the other side. On the top of the phone there is a 3.5mm headphone jack and microUSB slot which also works as HDMI output is placed on the bottom.

The last but not least feature worth the notice is the camera. The rear 8.1MP camera with LED flash is slightly raised compared to the Galaxy S, but not too much so you can put the Galaxy S II on the table (with the help of a rear lip that helps hold the phone) without problems.